The Honeymoon Trail is a popular track through Warner Valley, up the Colorado Plateau and southeast to Pipe Springs where it continued on to Lee’s Ferry and beyond. It was the route used by turn-of-the-century Mormons making the trek to the temple in St. George for, among other things, to get married. Hence the name.

Chastity never came at such a high price, considering the terrain and obstacles presented along this trail, not the least of which is its traverse of the edge of the Colorado Plateau. I’ve wanted to scout the upper part of this trail before I engaged the climb below. And I’m glad I did.

There are a couple of ways to access the graded road that leads to the Honeymoon Trail, our access of choice is right off of 59 just as it lifts up out of Hurricane. There’s a quick and tricky turnout on the east side of the road that is the landing for the Hurricane Canal Trail. 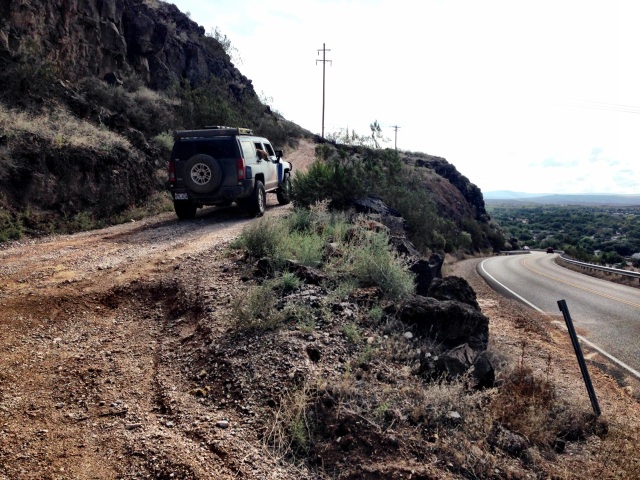 A quick ascent takes you up into a small canyon that crests to an overlook of Hurricane. The road turns east and drops a bit to a plateau bordered by Gould’s Rim mountain bike trail. 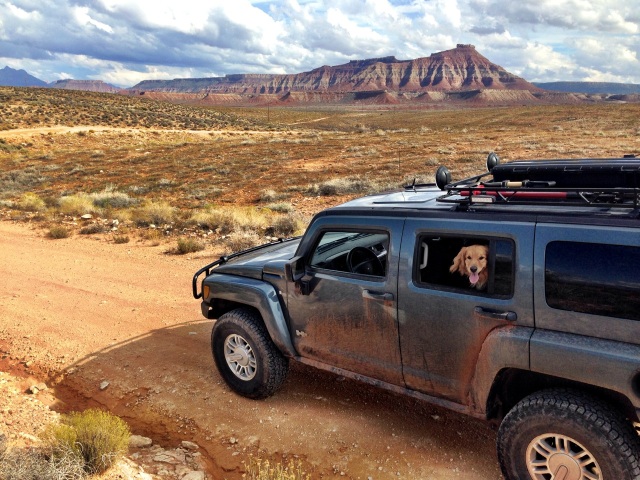 The road then bends around south as seen above. It isn’t well maintained through this area, rutted and washed out in several places, but nothing impassable in a standard four wheel drive. In a couple of miles the road intersects a main graded dirt road that will winds past Olympus Academy and then up and over passing Gould Spring where it divides, stay right. This is a graded dirt road, easy to follow since anything coming off the road is little more than a double track.

The road goes between the Divide just west of Little Creek Mountain. The shot below is looking back north from before the Divide. 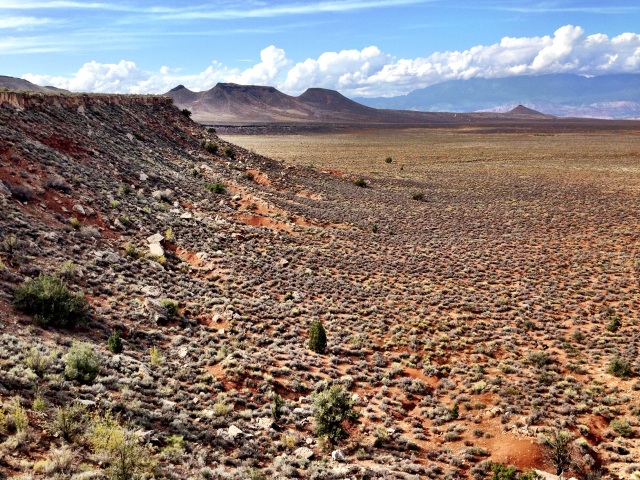 About fourteen miles into this trek, signage for the Honeymoon Trail appears to the west. There’s a large interpretive sign just like the one on the bottom side of the trail (see the Warner Valley Traverse), off the main road by a couple hundred yards. Take the road west that intersects. 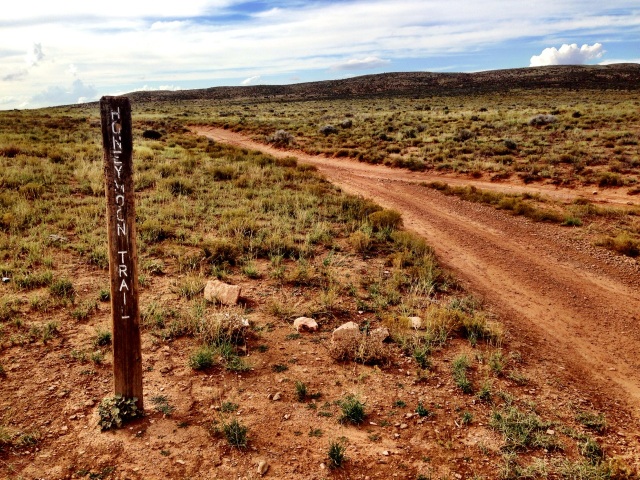 Next to the larger sign is the more common post sign seen along the Honeymoon Trail, though after it crosses into Arizona, the road is no longer marked. We drove west on this road to the edge of the Plateau. 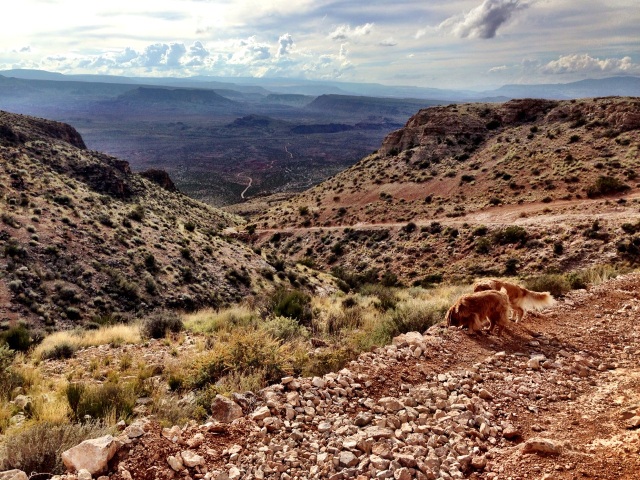 At 4500 feet the view is breathtaking. After a cursory look on foot, we decided to leave the H3 at its perch and hike down the trail a bit.

A large wolf spider caught our attention bringing our gaze to the ground beneath our feet where we found dozens of shell fossils. 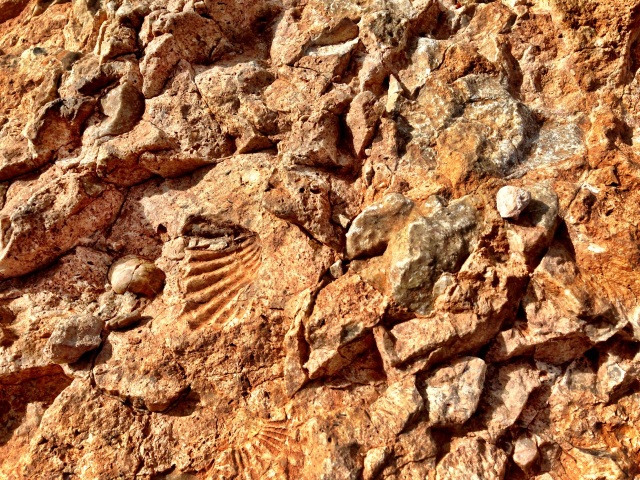 The trail is off camber, in parts up to twenty degrees, with nothing approaching level until the top. 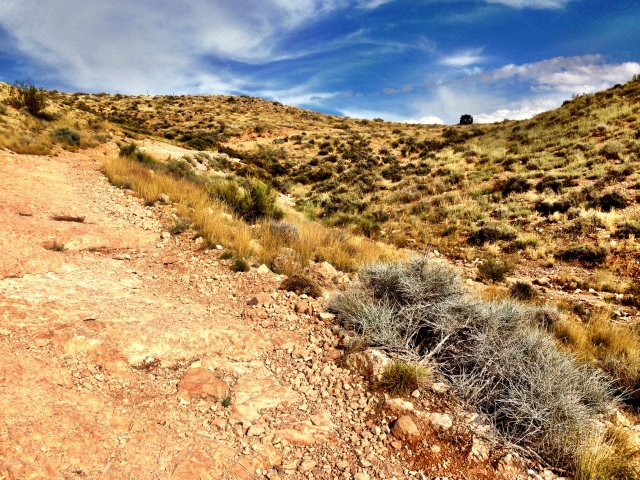 Looking west down through the crevice the trail is off camber in places closer to thirty degrees, loose shale throughout the pass. A side-by-side could make this, but I wouldn’t take the H3 through here. 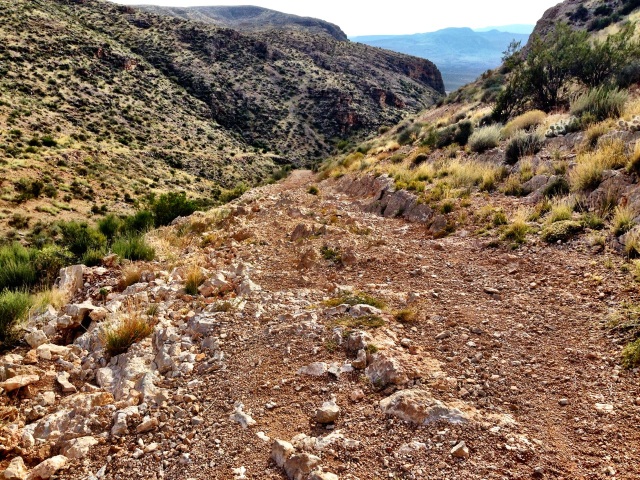 We hiked up the hillside to the right in the above photo and took in these views of Warner Valley. 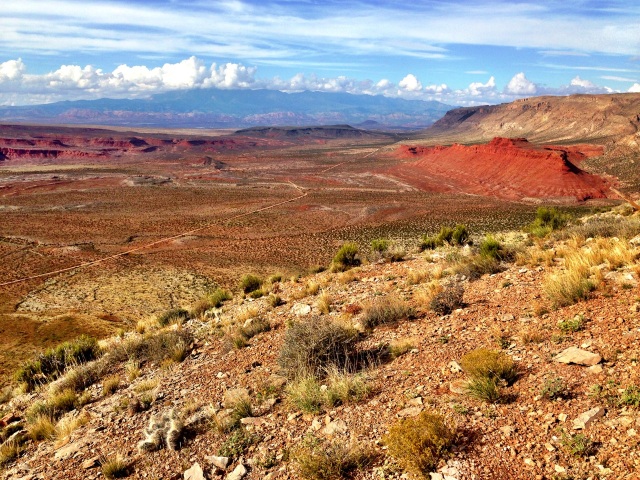 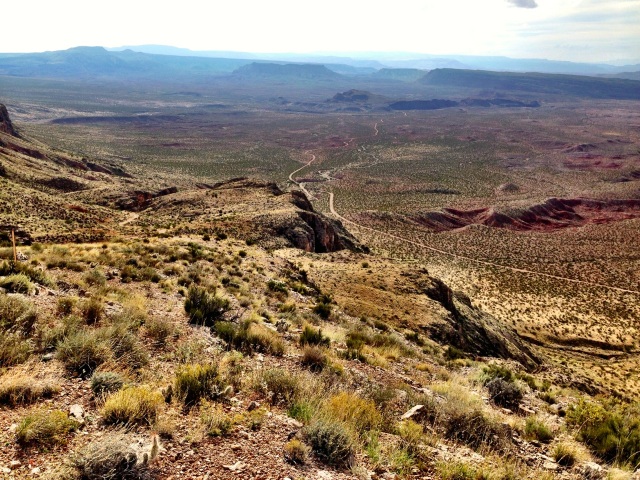 The image above shows the Arizona Strip Road heading south and winding down left into a riverbed. That’s the start of the Honeymoon Trail traverse of the Plateau.

We crossed into Arizona, the road now being BLM 1015, and drove another ten miles south, crossing two more full washes. 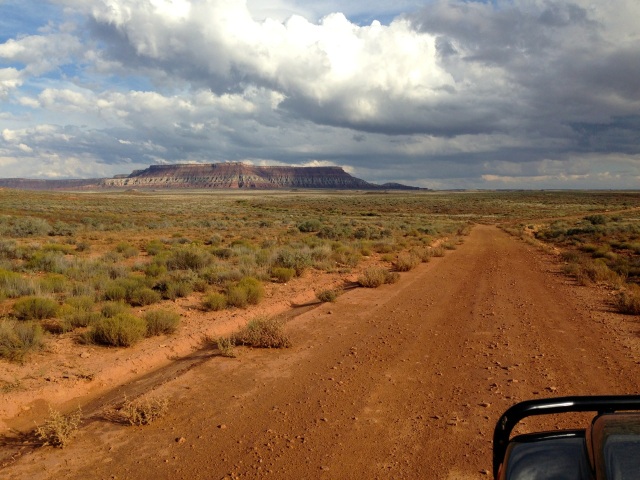 The weather started deteriorating pretty quickly and with two more run-off river crossings behind us, we decided to make our way back, treated to these views. We terminated the trek at 59 just outside of Hurricane (click the link to the map above). 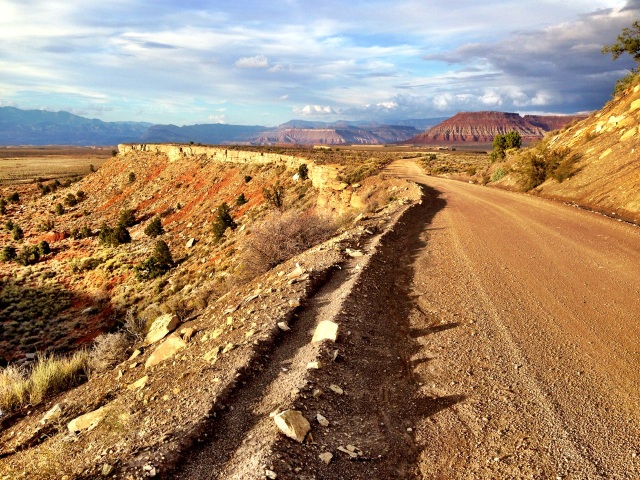 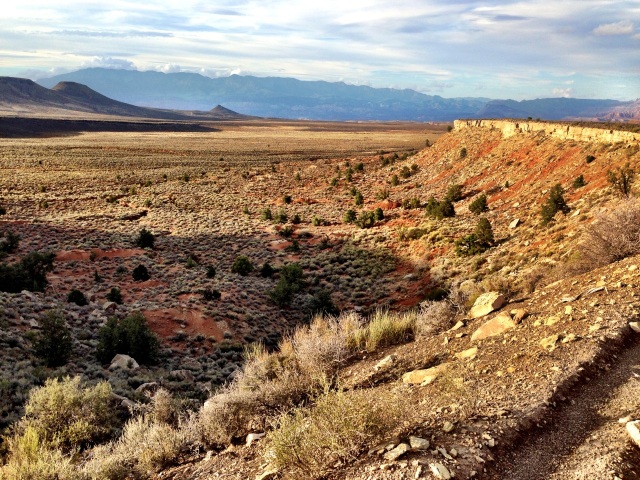 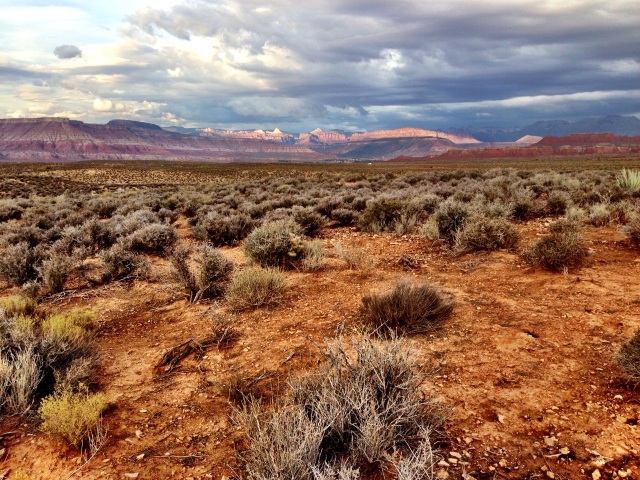 All water crossings on this trail are dry outside of flash-flooding, of which we’ve had a lot over the past three weeks. River banks were gouged with one access being a two-foot shelf drop into deep silt and a foot or so of water, but nothing slowed down the H3. 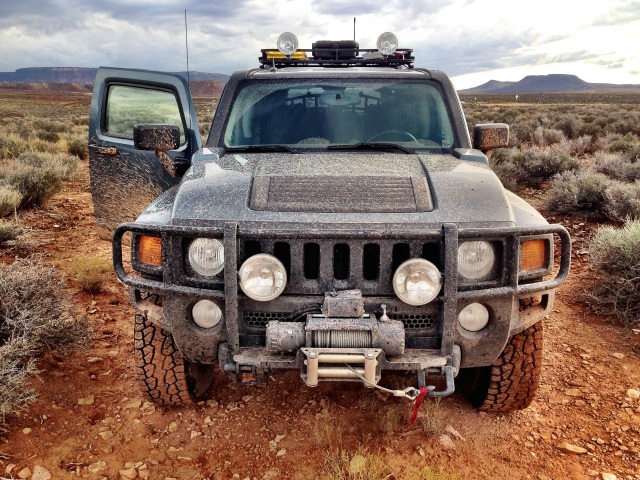 These were my traverse companions for this trek. 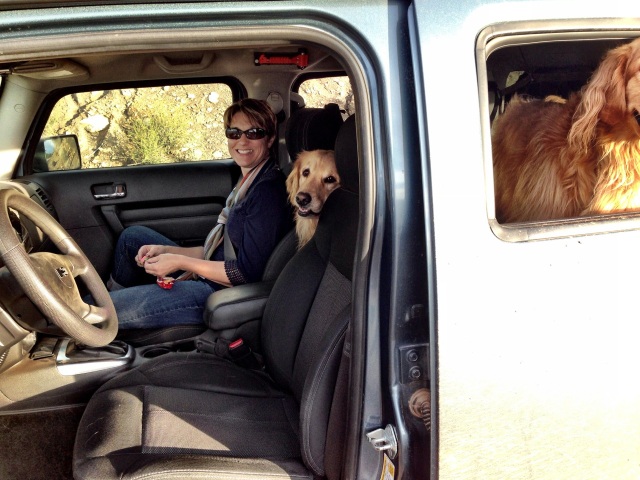 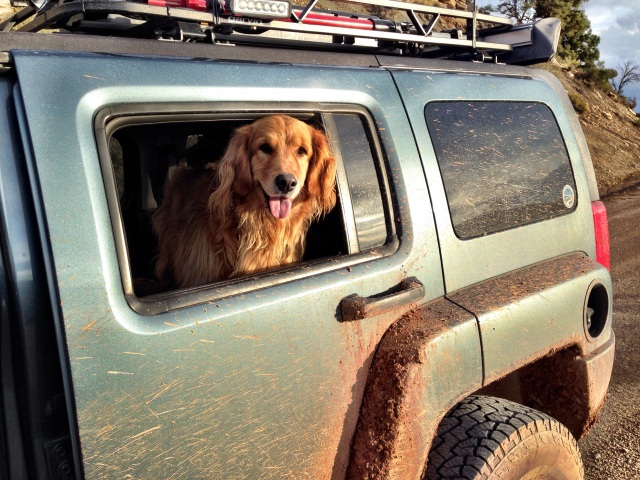