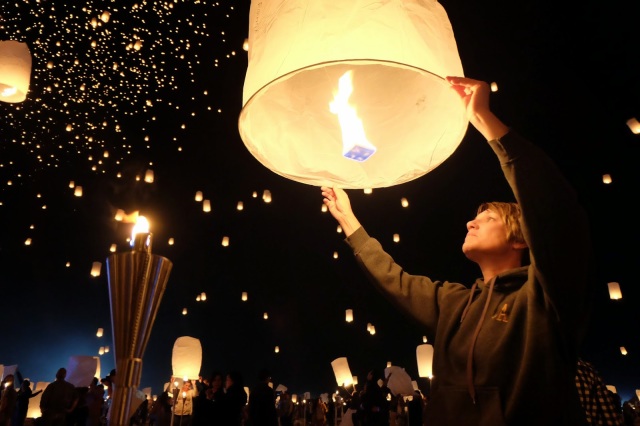 There wasn’t much mystery in coining the title for this blog a few years ago; Cornering Consciousness was not only the intent of our adventures, but also the outcome of the process. And in all that we’ve done so far we have yet to have that consciousness manifest with such impact as it was in our latest foray into the desert.

This one was with more conventional means and a lot less gear. We drove to Jean, Nevada where we boarded a bus that took us a few miles east into the Mojave desert to a dry lake bed. This one had been modified a bit.

We were making our way to the venue of the RiSE Lantern Festival. We ordered tickets for this event back in September when Mindy read about it on her Facebook feed. She’s wanted to be part of this ancient rite for a long time, an item on her bucket list, and we’ve both been looking for something to lighten the burden of October for me. We watched their video and were converted.

Following their email updates and instructions about the event brought us to this point of ambling along a cracked lake bed to a site that looked as if its participants were expecting light to come down out of space rather than for it to go up to the heavens.

Torches were spaced in a circular array radiating out from a stage in the middle, with yoga mats and lanterns placed at their bases, enough to accommodate the expected crowd of about ten thousand.

We set up our little site and had dinner, enjoyed a beautiful sunset, and watched the people file in and fill the circle. We enjoyed a live band and wrote messages on our lanterns.

And then the time came to light the torches that would be used to ignite the fuel source of the lanterns and then prepare for the first coordinated launch.

The wax wick takes a couple of minutes to ignite and the lantern itself takes two or three more to fill with enough hot air to give it lift. 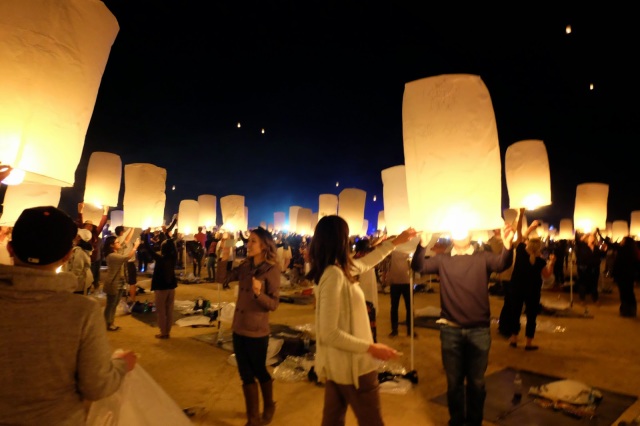 Once most of the participants had reached a point or preparing their lamps, they were, for the most part, released at the same time. Participants had two lanterns to release and the night sky kept filling with light over the next half hour.

Photos here or anywhere do not do this justice and video is a vain attempt at the same because any vicarious effort to understand the impact of watching light take flight cannot be captured outside of it saturating one’s own optic nerves and sinking deep into the heart. The reason for this is consciousness. Every lantern has its purpose; goodwill, a message to assuage, an expression of love, a release of burdens, a memorial, or a note to a deceased loved one. 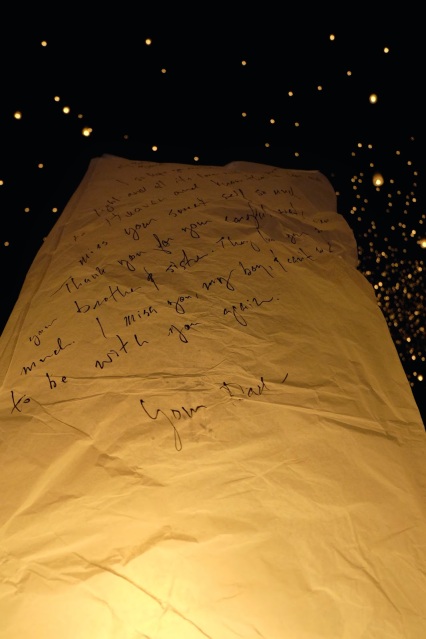