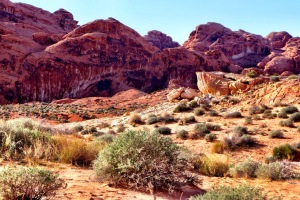 There’s a kind of cosmic camping serendipity that both graces and curses our adventures when we decide to rough it amidst the public. The grace is in a timing that affords us an unanticipated cultural experience. The curse is relative the amount of noise created by neighboring roughers after sunset and before sunrise and the rotation of the planet in between.

This was our first camping trip in the H3 and being we’re still outfitting for overland travel to more primitive, less populated areas, it wasn’t yet prepped to carry the water we’d need to be self-sustaining. Valley of Fire was our choice for the trip, far enough away from St. George and in the right, warmer direction.

We arrived at the park’s visitors’ center (Valley of Fire is a Nevada State Park that does not accept National Park passes) where we learned not surprisingly that all the campsites were full. Mindy’s optimism pressed us on to the Atlatl Campsite in hopes we’d find a vacancy, and we did. 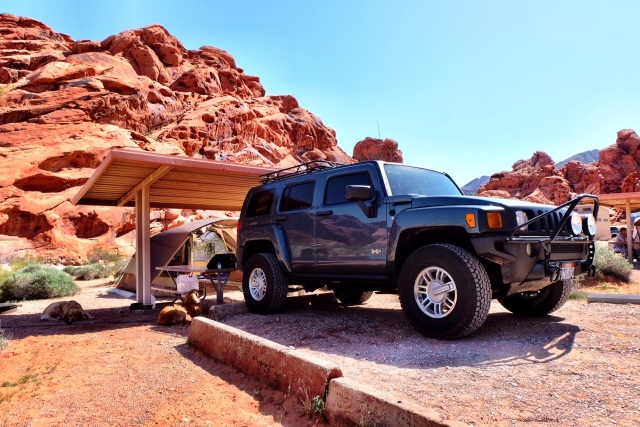 It was a nice spot amongst RVs and adjacent a quiet tent-camping couple. Not only was this the break-in trip for the H3, it also initiated our most recent kit, a Field and Stream six-person tent. 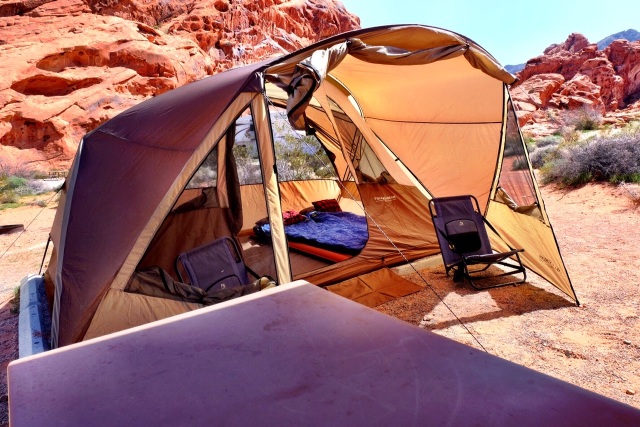 Our Kodiak canvas tent went as part of the deal in the sale of the Montero, so we needed to re-gear, this time with something lighter, but still with room to enjoy inside in wet weather with two dogs, as well as tall enough to stand in. This kit has a spacious 8 by 12 foot floor pan with a huge screen window at the back with a full-coverage fly that creates a protected vestibule in the front. 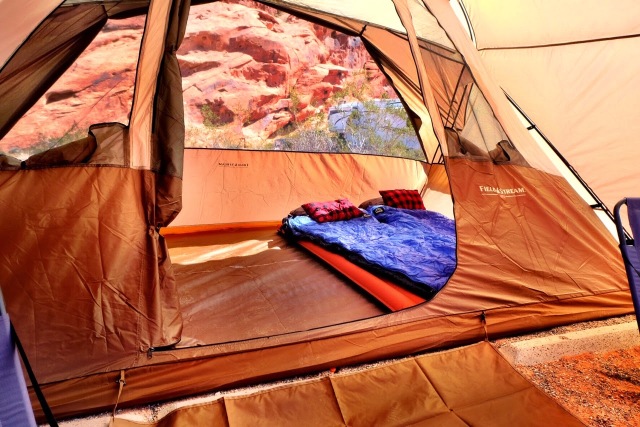 Can’t beat the value at under $130. We’ll test its durability this season. After camp was set Mindy made sandwiches, initiating the rear-door shelf modification I did on the H3. This modification came in real handy on the Montero. 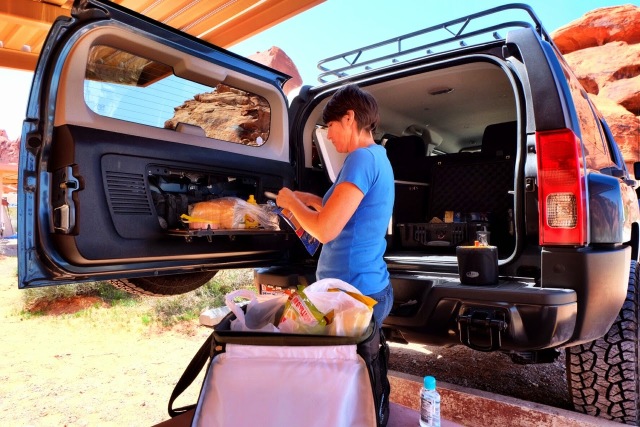 Later that afternoon we loaded Ginger and Maryann up and drove into the main park on Mouse’s Tank road to its end at the White Dome trail where we took the girls on a little hike. 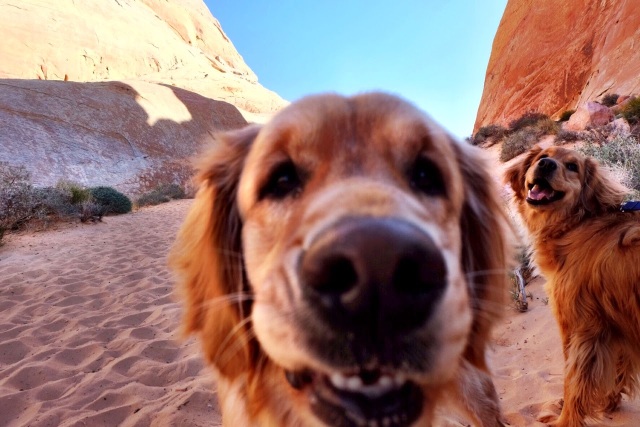 Maryann managed this selfie with her photobombing sister. These two have matured into incredibly well-behaved pooches and are a pleasure to travel and camp with. 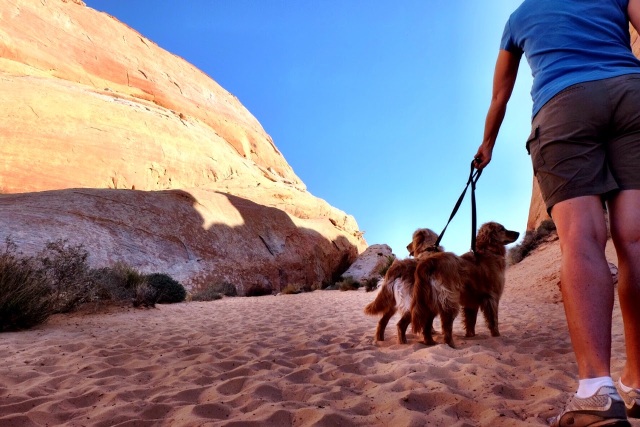 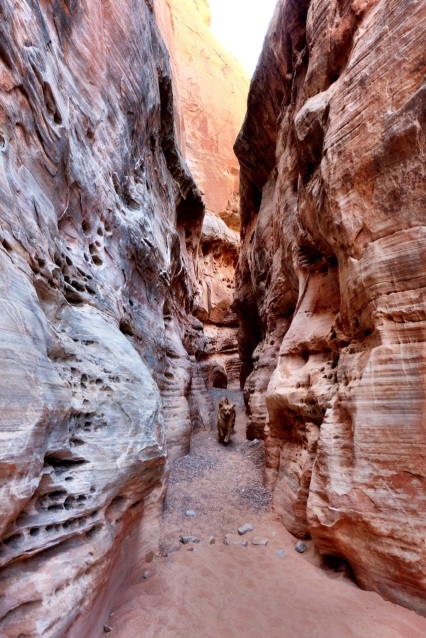 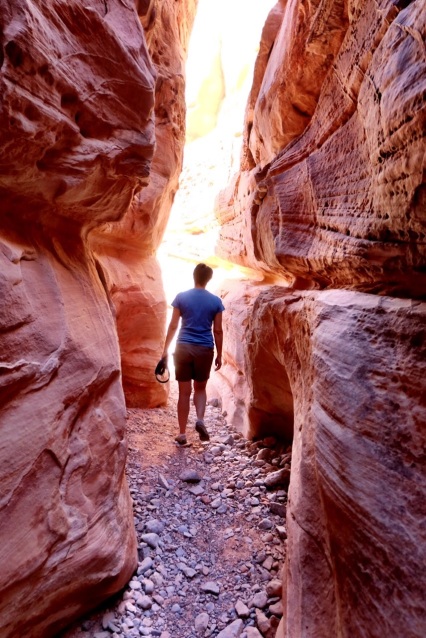 When we got back to camp we noticed our quiet neighbors had bugged out, promising an even quieter evening for us. We made dinner and a nice fire and enjoyed the valley’s illumination of a full moon while exploring constellations using the SkyView application on my iPhone.

This is a free app that brings augmented reality to star gazing, superimposing an incredibly vast database of stars, planets, constellations, satellites and space stations along with their orbit trajectories over the iPhone camera’s view of the sky. Truly remarkable and enjoyable. A primitive fire at our feet and outer space at our fingertips.

While we were enjoying the evening, two families arrived at the neighboring campsite with children ranging from a screaming toddler to two very competitive adolescent boys, with sweet little girls in between.

The screaming went on all night. And we were in a canyon. That echoes.

When we came into the campground that afternoon we noticed signs declaring an Atlatl competition, giving us some clue that Atlatl must have something more to do with the environs than simply a name. Once we got the morning sorted out we hiked into the competition area and learned all about the Atlatl.

While the use of this hunting instrument was relatively widespread over North America, this area has the only petroglyphic reference to this weapon that predates the bow and arrow. 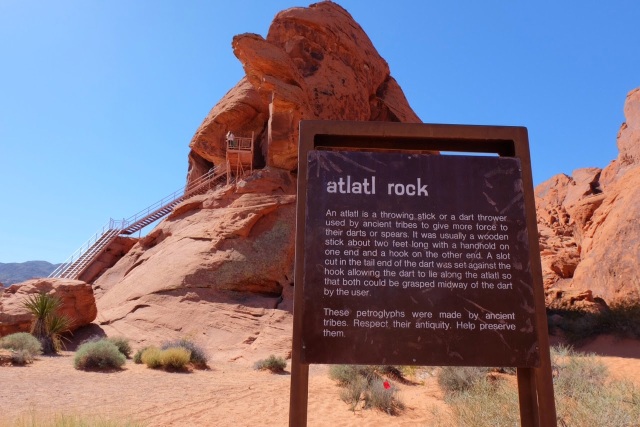 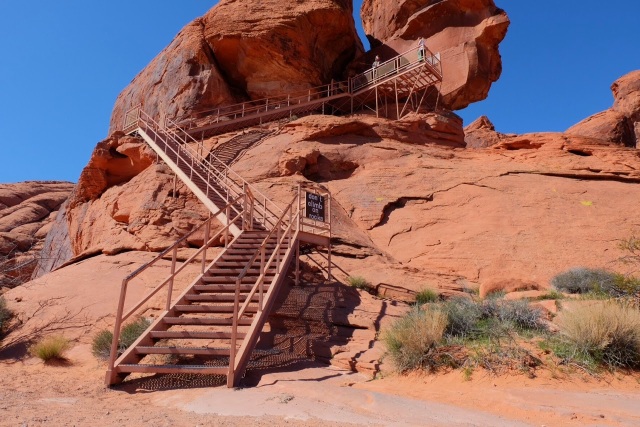 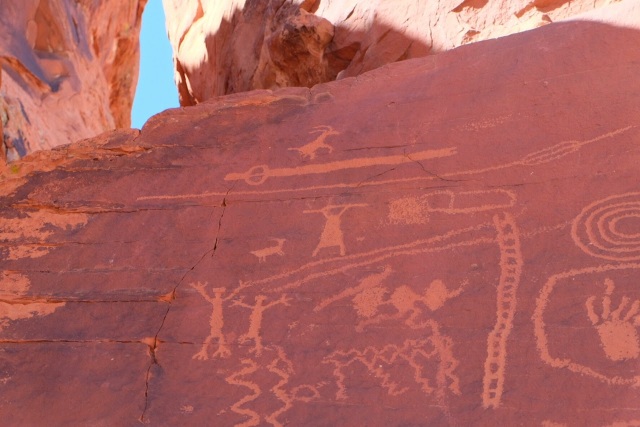 The Atlatl is illustrated on the top of this rock art just below the depiction of the mountain sheep. The Atlatl has two holes toward one end where one would insert the index and middle finger. At the other end a barb would hook into the end of the spear like the one depicted just beneath the Atlatl. The spear is bowed because that’s how it looks in flight due to the increased amount of momentum provided by the launching tool. Extraordinary. This is Atlatl Mecca.

This national competition hosted competitors from all over the States, vying for high scores on targets using their handcrafted Atlatls. 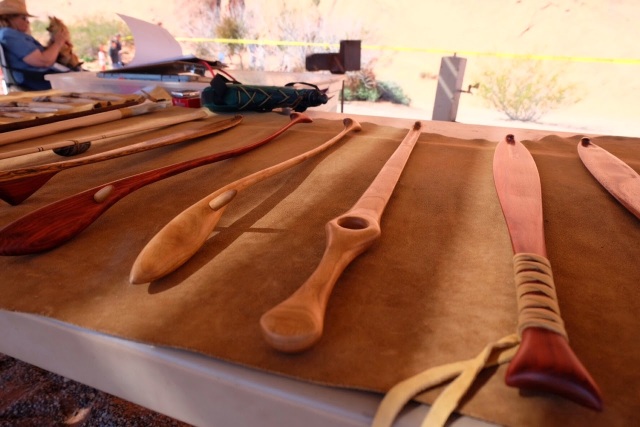 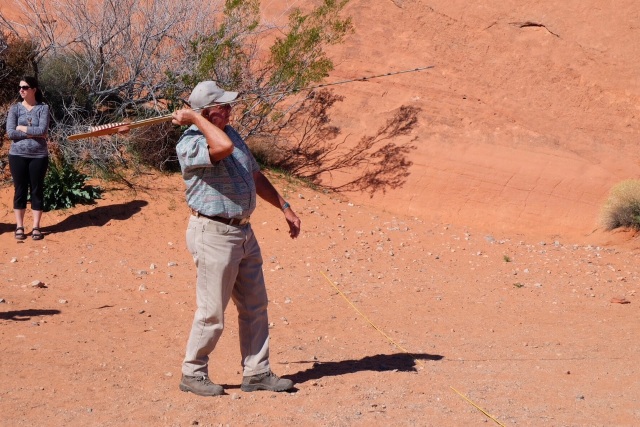 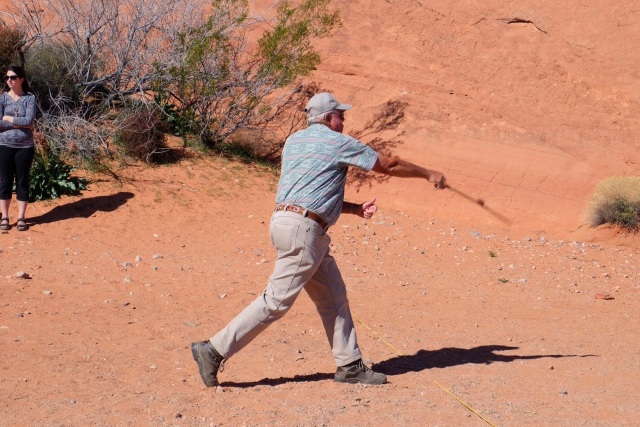 The diversity of competitors was amazing, from young kids competing side by side with women and men from all ages. It’s got me thinking… beats golf.

Wiser and a bit more weary we hiked back to camp, packed it up and drove home. It was sure nice to get out.