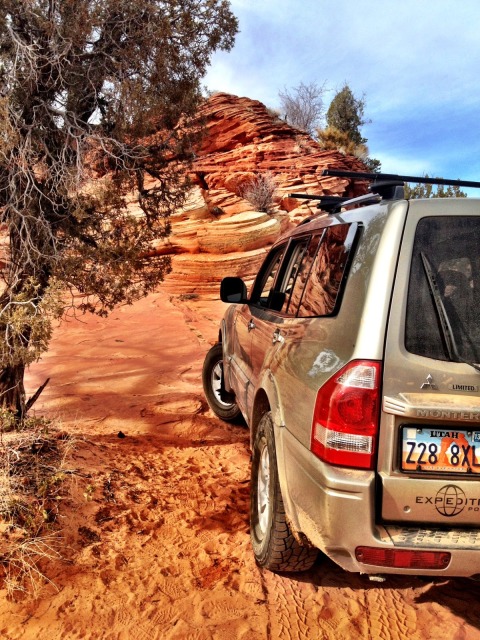 There’s a space we occupy as adventurers nestled between won’t-it-be-great-when and this-is-it. It’s an active tense of real versus ideal, a place we spent some time in over last weekend on what started out as a three-hour tour to The Barracks that turned into an overnighter in the steep canyon of Parunuweap, east of Zion Canyon.

The Barracks is a range of high bluffs scored by the east fork of the Virgin River. A colleague and avid off-roader told me of this obscure trail that offers incredible views of Zion National park from the east side. I tried to find the trail on my USGS topo app to no avail, only the BLM-issued map available through the Kanab Field Office accurately depicts the routes through Elephant Gap, past Sandstone Butte, adjacent to Rock Canyon and on to The Barracks.

As disappointing as this will be, I have no idea why they have that name. Perhaps a reader here can help out.

As he talked about the trail it sounded as if it was a short jaunt that ended at Highway 89 just short of Mt. Carmel Junction. Not so. The Barracks is an out and back that connects to route 20, the way to The Barracks kiosk near the junction, about thirty two miles.

All routes are old Jeep trails, sandy and rutted with many banked curves punctuated by Kaibab limestone. At one deep sand area we found old sand tracks left for those who became mired. We didn’t. The Montero ambled along without a drift or hesitation. We stopped at The Barracks for the view and lunch and let Ginger and Mary Anne have a run. The White Cliffs in our vista are relatively uniform in their shape, dodging out from the mesa like toes, or perhaps, like barracks. It’s a thought. 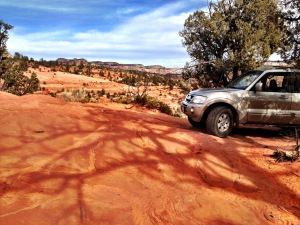 A little more than five miles back to Elephant Gap and we mounted route 20, north to Harris Flat, where Mrs. Saint says is the better view of Zion Canyon. She’s right. Around Harris Point, through Elephant Cove and down a sandy descent to the narrow valley floor of the east fork of the Virgin, and our first river crossing.

It’s safe to say that an approach angle doesn’t mean much if the departure angle hangs like a Frank Lloyd Wright cantilever, and thus the Montero’s handicap. Thirty nine and 17 degrees respectively. There’s a popular notion in overlanding that one should explore their vehicle’s limits to determine what modifications are needed. That became the theme of the day’s three-hour tour, now going on 5:00p.

The river approach was no big deal, but the egress had deteriorated through the abuse of much larger tires making mounting improbable and high centering definite. We had ten inches of clearance, but it wasn’t enough for my peace of mind given a stock skid plate that is more aesthetic than pragmatic.

Downstream a few yards was another egress that with a little landscaping and careful threading of the Montero through a cluster of trees, would be more to our advantage. Collapsible shovel deployed, a yard or two displaced, and the Montero with its limited slip made easy work of the egress. 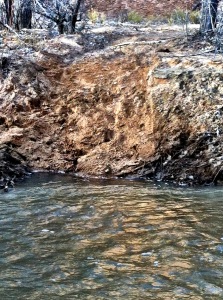 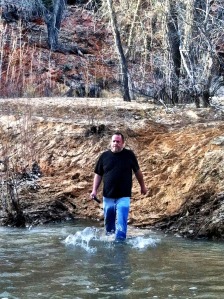 We repeated this three more times, either reshaping the shore or finding alternate egresses. Each became more difficult, two impossible since the high-centering approaches were frozen solid, not having seen the sun, ever.

They required a number of alternate attempts which became more hasty the closer to nightfall. This is where I learned something about myself. My degree of carelessness is directly proportionate to my level of desperation. The desert pinstriping was turning into gouges and the front and rear bumper covers we’re compromised, detaching from their supports.

The fifth egress was a berm of solid ice, three feet tall blocking any further progress on route 20. Mindy took the dogs looking for an alternate path blazed by four-wheelers while I scouted the river looking for a low enough bank that the Montero could mount. Driving upstream, water at the axles, I found a spot and turned in left to mount at as a much a perpendicular as I could. Left front up, then right, and then the bank failed sending the Montero sideways into the river. It was slow enough to absorb some momentum and the left wheels came back down to water and earth. Crossed up, my dyslexia paid off and I turned the right direction, the wrong one would have been terminal, we would’ve lost our only shelter for the night.

I called for Mindy to come and backed the Montero downstream and up the bank I descended, and we talked about plan B.

See, I’m the luckiest guy on the planet. Mindy is as level-headed as she is beautiful, my optimistic influence. We’ll climb back out the way we came, a hundred twenty yards up at thirty degrees of sand. Three attempts, but to no avail. She suggests deflating the tires but I had no confidence in the on board compressor. It crapped out on me earlier checking pressures before we left.

Things become painfully apparent when you need them and they’re not there.

Night was falling. We’d been at this for a couple of hours. Grinding noises coming from the front end. We backed down to a level spot between the incline and the river. Stuck.

No cell service. We told no one where we were going. No CB range in the canyon. The GPS gave a nebulous position about seven miles southwest of Mount Carmel Junction.

We had the remnants of our picnic, an apple, grapes and some chips. A half gallon of water was left. I had on hiking shoes, ankle socks, jeans and a t-shirt, all of which were soaked. I had a fleece pullover that was still dry. She had jeans, sandals, socks, a shirt and a hoodie, all dry, thank goodness, plus three shirts she picked up shopping before we left town. It was 40 degrees and falling.

I had no civil means to start a fire, but a three-quarter tank of fuel would be ample to heat the interior from time to time. There were two rain ponchos in the back. She walked the dogs while I got out of my wet clothes and clad myself in the fleece and wrapped my legs in the plastic poncho. Sexy.

And we settled in for the night. Mary Anne crawled up front and laid across Mrs. Saint like a 65 pound lap dog, and Ginger appreciated the new room in the back seat.

We talked, real versus ideal. My training has me default to worst-case-scenario. If we couldn’t drive out, we’d hike out in the morning and call for help in extracting. The ideal was that we’d somehow overcome the river crossings and navigate our way out.

Real for me was a reclined wet leather seat. Ideal was our bed at home or our RTT stowed back in the garage. Sleeping bags, a change of dry clothes, the mess kit in a Pelican case that had stoves, a JetBoil, coffee, and a dehydrated meal; back in the garage. To my credit, what little I had left, I had a water purifier stowed in the back.

It was packed just above the five pound sledge hammer. Three thoughts wove through what little sleep I got. One, I didn’t assess the river itself as an alternative route. Two, I hadn’t used all my recovery tools; a HiLift, a machete, an axe, and that sledge hammer. All I had used was that puny shovel. Three, I had to address the grinding coming from the front end. I still had a drive-train and steering, so it couldn’t be too bad.

Thirty four was the low for the night. A cloud cover rolled in about two-thirty keeping temps from dipping any lower. We fired up the Montero four times during the night for fifteen minutes, running the seat heaters for part of the time. Were I dry to begin with I would’ve slept more, but the shivers kept me awake.

By seven I donned my wet jeans. I dried my shirt over the top of the engine in between heating and should’ve done the same with the trousers. My socks and shoes were still soaked as well. I need to think this all through better.

The front tires, plus one in size mounted on spacers increasing the track, were rubbing on the bumper cap stanchions that had collapsed during the river crossings. I removed the supports and inspected the running gear and it all looked fine.

All mounted back inside we tackled the river. This time, though, I busted out the frozen berms with the sledge and leveled out the ramps, moving earth and ice and rocks to eliminate high centering. I widened the track to keep anything from slowing down the Montero, hacking away branches and cutting down banks, and one by one we made each crossing, by-passing one by driving through the river. Though water was past the door sills, the interior stayed dry. Water came up over the hood a couple of times but we never swamped, even without a snorkel.

We reached the ice berm that turned us around the evening before. I walked the river around a bend forty yards ahead and found the trail head that would lead away to higher ground. Mindy and the dogs met me there as I drove through the river between banks of ice and made the easy egress out on the other side, a very happy moment for all four of us.

We drove along a sandy trail, and she asks, “What would it take to lift this?” Really, I’m not making this up. The luckiest guy, right? She is now appreciating the need for certain equipment vital not only for the fun we were having, but for our survival.

The trail took us back down to the river just south of the ranch one can see on Google Earth. We weren’t far from Highway 89, but between us was solid ice for thirty or forty yards that then dropped off a ledge about a foot and a half into the river, crossing over the thirteenth time. I walked it sliding along like an angry NHL coach. This would test the limits of the traction control and limited slip.

The Montero crossed, no slip, no breaking tail, and dipped into the river like a jacuzzi, the ice bank slowly giving way under her weight. Another thirty feet in the river and out.

Route 20 joins the ranch road and another quarter mile or so we mounted the asphalt of Highway 89.

“That was fun!” she said. I should pinch myself. We pulled in to the Chevron at the junction. Mindy got us coffee and donuts and water for the dogs. The attendant was kind to provide hot dogs and jerky for the girls while I pulled the right front wheel to inspect the calipers and cleared chatter-inducing debris. From there we headed to the east entrance of Zion National Park and stopped to inspect the damage. 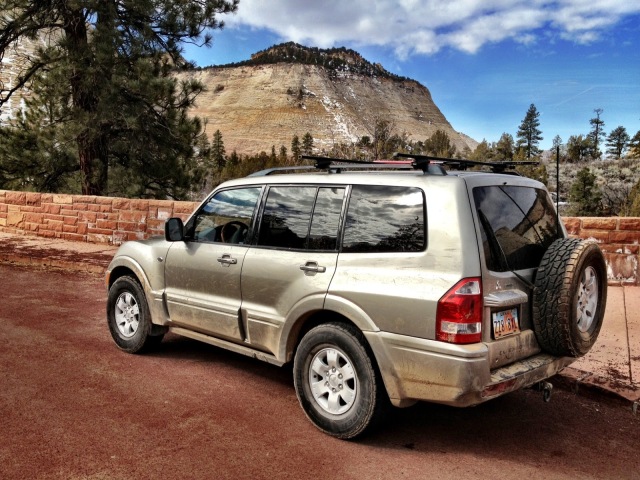 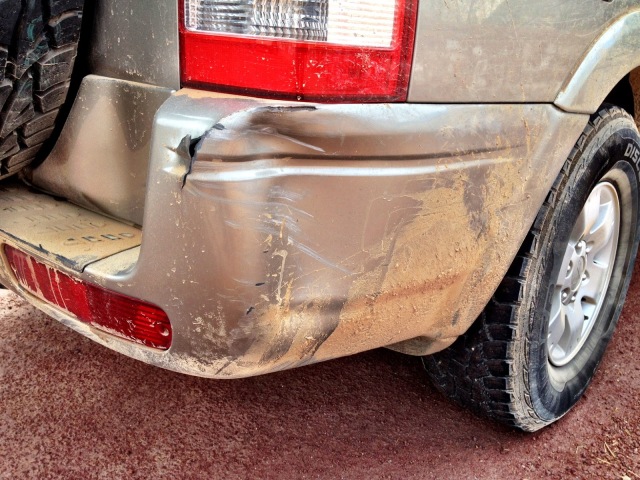 That was fun. That was exhilarating. That was beautiful. The Montero proved herself, and we had more confidence. At one point during the night I was ready to abandon it all, but that morning’s small triumphs displaced the angst and brought me back to that place that exists between won’t-it-be-great-when and this-is-it.