This trip was scrubbed two weeks ago when it was originally scheduled due to the unplanned surgery reattaching my left biceps tendon. So it’s with great relief to get to a point where we could make this little overland trek in a minimum of pain.

As with any adventure that takes us east out of St. George, this Grand Staircase trek took us through Zion Canyon.

The idea was to drive to Escalante, Utah, where the trailhead to the Smoky Mountain Road can be found down a side street not far from the BLM offices on the south side of town.

We’re always glad to get back on the road or back on the water, to move, explore, share, talk, eat, sleep and drink in the proximity of each other.

Mindy was able to get off work earlier than expected giving us a head start and putting us in Escalante a couple of hours ahead of time. The plan was to camp at Escalante Outfitters, a barely-an-acre parcel set up for tents, not RTTs. So we camped in the parking lot, fully warned that a wedding party was scheduled for that evening.

They have a good little restaurant which filled up quickly. We ended up sharing our table with a father-daughter duo from the land of a thousand lakes. Some dinner disclosure later we discover a number of commonalities; he’s in film production just wrapping a feature out of Moab, and his sister teaches at U of O in landscape architecture where our Katie is studying in the same discipline. Small world, though I’d hate to paint it.

If you’ve been following from previous adventures, you’ve noticed the RTT has been rotated ninety degrees to facilitate the ladder. Works much better this way.

And speaking of ladders, and ironically as well, Escalante bears the name of this territory’s first white explorer, a Franciscan missionary on his way (and wisely so as opposed to stopping in the Great Salt Lake Valley, in my opinion) to Monterey, California. The irony is in his name, meaning ladder, or stairs. Did he know that some day a Democrat would come along and through executive order squirrel away and protect almost two million acres, turning Utah State land into Federal land and call it The Grand Staircase National Monument? Probably not.

But we’re glad it happend. Thanks Bill.

The wedding party, as predicted, escalated in its partiness, and since we’d been up since four that morning, having driven two kids to the airport in Vegas, we decided to opt for a more quiet and private place. We broke camp in moments and drove to the Smoky Mountain Road trailhead where all was quiet and dark and had ourselves a wonderful sleep.

At daybreak we went back to the Outfitters to shower and have breakfast. We fueled up and packed as much ice as we could and hit the seventy-eight miles of dirt road.

We did a little cattle herding along the way.

The drive is beautiful outside of Escalante with enough riverbeds and terrain changes to keep it interesting, but not real technical.

The road got its name from what it traverses, an actual smoking mountain, a vein of coal that’s been burning as long has history has been recorded. We managed to miss it, though, operating under the assumption that the road bearing its name would go by it. Not so. For that you need to take the Smoky Hollow Road.

The road we navigated took us to this great overlook of Glen Canyon where we stopped for lunch and to saturate optic nerves with this view.

It’s at this point the Smoky Mountain Road becomes dynamic, descending thousands of feet off of the Kaiparowits Plateau, a step in the Grand Staircase to Warm Creek Canyon.

Just as the road enters the Glen Canyon Recreation Area, the road tees into 230, which goes to Grand Bench. Along the way is road 264, heading south taking us to Romana Mesa that overlooks Gunsight Mesa. This road turns very technical in its last few miles, slow going with ledges and boulders, but the scrambled ambling is well worth it. 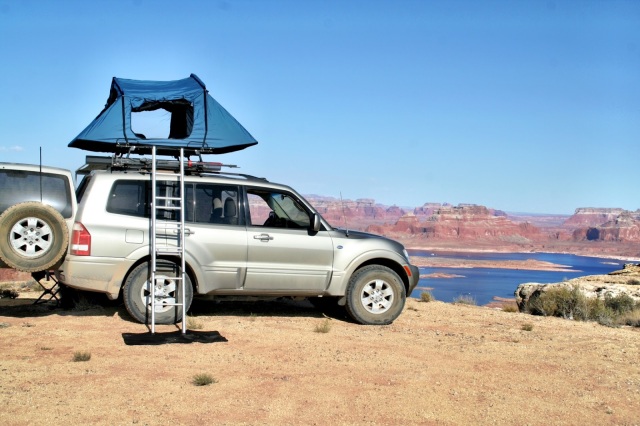 We arrived mid-afternoon allowing time for a leisurely set-up and a nice nap under our shade.

Late afternoon we prepared a dinner of porterhouse and pasta with fruit. Got to initiate our latest piece of camp kit, the Volcano collapsable grill.

Made in Springville, Utah, this grill collapses to half its size and makes extraordinary heat out of a handful of briquettes. These steaks were decadent.

Dinner was scrumptious, the view even better, but it was the company that made this evening perfect.

Apart from kayaking Lake Powell early or off-season, this is one of the few times we’ve found ourselves totally isolated. Being completely self-contained, it was awesome to disconnect and take in 360 degrees of just being. 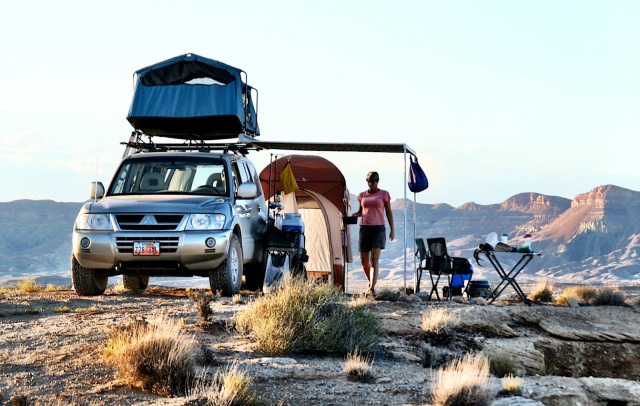 One of the appeals of ocean kayaking is the shift in perspective; puts you in your place quickly and gently. The same can be said for this mesa.

We had an extraordinary evening, a moonless night sky, and undisturbed slumber until the wind kicked up.

After breakfast we struck camp and packed. 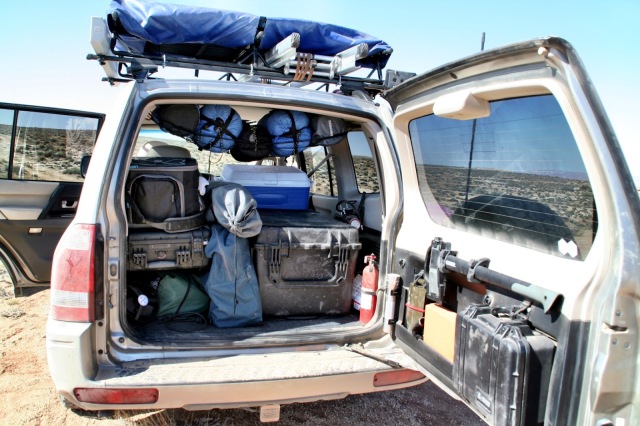 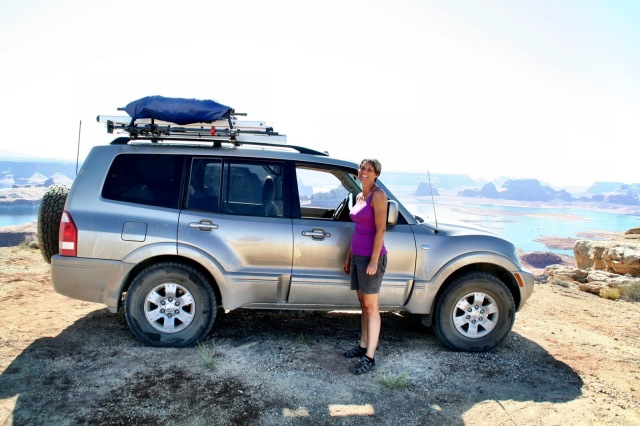 The track to Romana is obscured by the surface, disappearing completely were it not for the cairns spread about to give the attending eye a line to drive by.

We descended out of the mesa and down to the moonscapes of the crustaceans, gray sandy surface inhospitable to anything organic save itself. 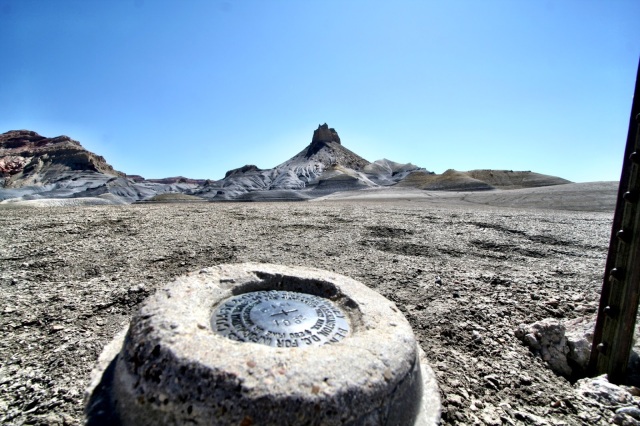 We got back on 300 to take us to Big Water when we noticed road 231 to Warm Creek Bay, a place we kayaked a year ago last May. The road follows the river bed of Warm Creek and about four miles in, if you’re paying attention you can see where lake levels have been in the past.

Amazing geology. Imagine being able to interpret the stories of these layers. 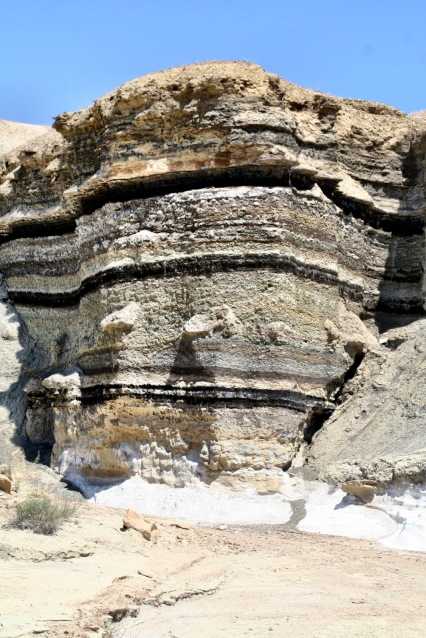 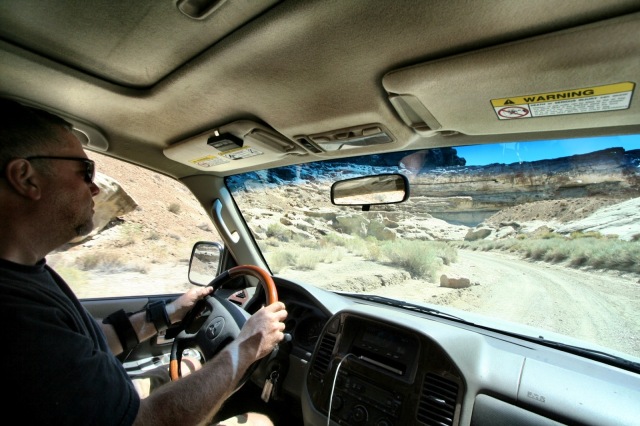 This road was a bit more technical, fun to drive. When we got to Warm Creek Bay we ascended a dune, thirty to forty feet high with deep divots where others tried to mount and failed. The Montero breezed over it without hesitation and navigated deep sand without miring.

Coming out of Crosby Canyon.

At Big Water the access road tees into Highway 89, across from which is a BLM visitors’ center.

We’re running a new set of Cooper Discoverer ATPs, oversized plus one. They’re not huge, having to keep in consideration that we use this vehicle to burn up a lot of highway miles, but they’re remarkable in their traction and handling on and off-road.

We air down to 20 psi on the track smoothing out washboards and increasing tire contact patch. With the Montero’s limited slip differential this combination seems so far unstoppable. I’m certain we’ll find its limits another time when we’re better prepared for it. 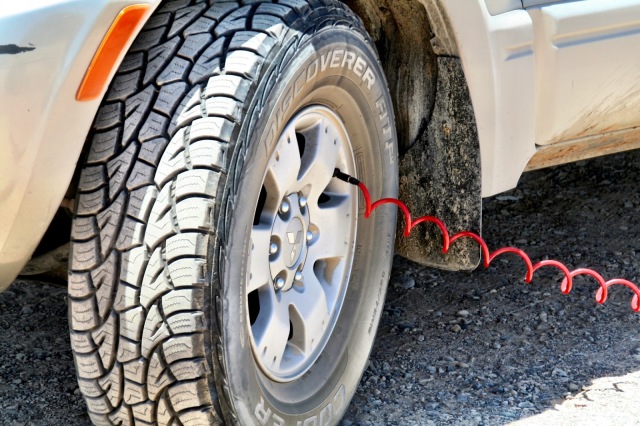 Part of that prep is a suspension upgrade, Old Man Emu springs and struts lifting her another inch and a half, an ARB bumper hosting a Warn 8000 winch along with road lights, and Rocky Road rock sliders to protect the sills. End of Summer wrenching.

I finished airing up while Mindy enjoyed the exhibits at the visitors’ center. This area of The Grand Staircase boasts the most varied and plentiful evidence of pre-historic life than anywhere else on the planet with proof as well that all this was deep under a sea.

That would make it a little harder to navigate. We slabbed it to Kanab where we had lunch, and then home to a cool pool and warm showers.