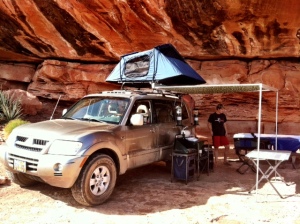 We decided our first excursion with our newly acquired kit would be to Tuweep or Toroweap campground, overlooking a 3000 foot drop to the Colorado River.

We left St. George Saturday after Mindy’s Spokes for Hope bike race, taking the Main Street route, BLM roads 1069 and 5 from St. George, about 90 miles to Toroweap, most of which is off-road.

Our trip back was the Sunshine route, BLM 109 to Highway 389, a few miles east of Pipe Springs.

We arrived late afternoon and established our camp. In about ten minutes we had it all up, including a shower/changing room. The roof-top tent goes up in seconds, along with the awning. The kitchen deploys with pedestals for stoves or coolers along with a canvas wash basin under a removable work surface. 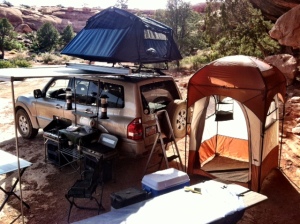 We didn’t know what to do with ourselves having grown-up camping gear compared to what we pack on the motorcycles. 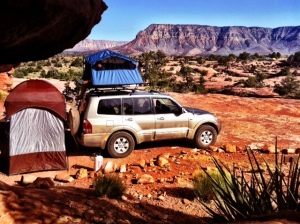 One improvised item is a heavy-duty garden sprayer I converted to a shower by replacing the hose and sprayer with a food-grade tube and shower head from an old solar shower. Pumped up it provided great water pressure for washing dishes and showering. 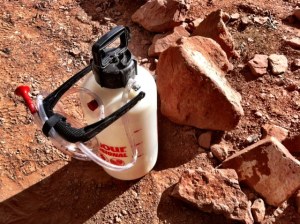 We broke-in the kitchen with grilled chicken, sauteed squash and rice. A real meal not consumed out of a bag. 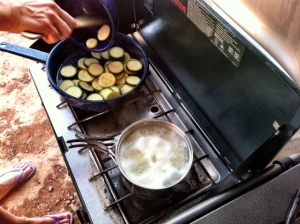 After dinner we hiked down to the overlook to take a few photos. Found these natural tubs along the way. 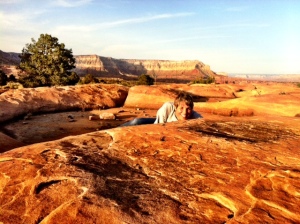 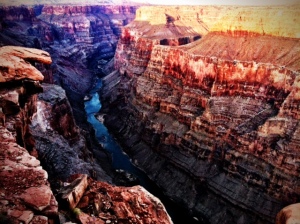 You don’t take a step anywhere near the edge without second-guessing the canyon wall’s integrity. It all has the look of giving way at any moment. We talked about what kind of sign the National Park Service might erect were this the case and decided on, “Natural Selection in Progress.” 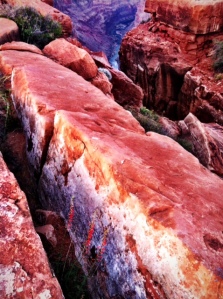 Three thousand feet to the river. Made us jealous of the wind swallows, the California Condors and the ravens.

Back at camp we relaxed a bit and watched the stars unveil and climbed up to our roof-top nest and turned in. Comfortable.

The wind picked up later taking the awning down. We rolled it up and tucked it away and admired the Milky Way, the half-moon having gone past the horizon.

Sunday morning I woke up early to someone listening to NPR, of all things. A down-loaded podcast since there’s no service of any kind there. Early, like six-early on one hand, but NPR on the other.

Then the goofing around, the giggling of a couple of park rangers. I climbed out of what we’re now calling the bear-trough around 7:30 and improvised a way to make coffee without a press, the one with the JetBoil that I left at home. I boiled four cups of water in a tea pot, added two scoops of Breakfast blend and let it steep for five minutes, then poured, filtering through a paper towel. Best darn coffee I’ve ever had.

Mindy joined me and we made a hearty breakfast, accompanied by a floor show. The reason our rowdy rangers got up so early was to take on the task of cleaning one of the campground’s two composting toilets. They dawned hazmat suits armed with shovels and heavy-duty garbage bags, and though they were about seventy yards away we could hear every word due to the parabolic nature of the cliff under which we camped. 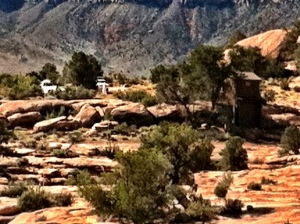 The shot above is an iPhone telephoto snap. The composting restroom is on the right, and the white-clad cleaner and his pickup truck on the left. The dry-heaving, and exasperated shouts of “How can anything smell this bad!” gave me a new appreciation for Park Service employees. 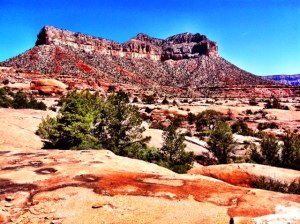 After breakfast and dishes we hiked an old Jeep trail that took us around the Toroweap bluff to an edge of the canyon. 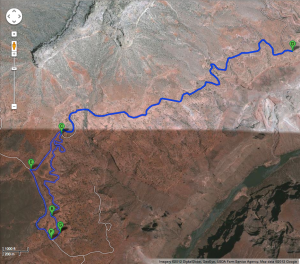 As a loop it’s a three mile stroll, but we continued on the old double-track to get to the canyon’s edge, giving us a different view up-river. 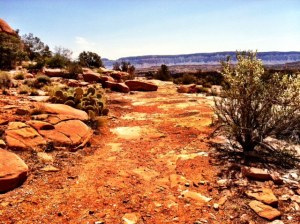 It’s impassable as a double track, mainly due to huge boulders that have sloughed into its path, but at one time it must have been an incredible off-road trek. 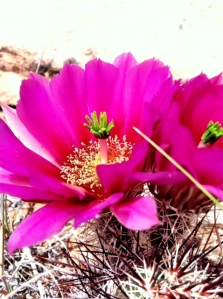 Everything is in bloom and vibrant. 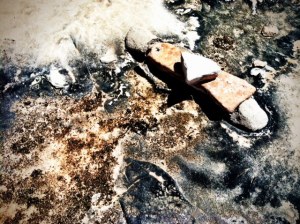 We left the double-track and made our way to the canyon wall along a water pocketed section of slickrock with natural carved basins that collect water. We came across a number of them that had been modified with rocks and mortar to create a dam. In the image above you can see how the mortar was used as a dike. Not sure who or when.

Other basins were etched with fissures leading into the basin to catch more water like this heart-shaped basin. 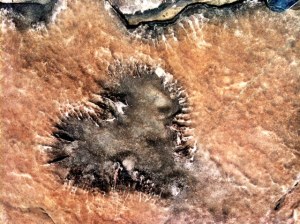 Just beyond the basins is this view of the Colorado. 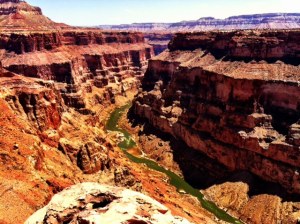 We sat and watched the acrobatics of the wind swallows, zipping past our heads at g-forces no human could withstand.

After a long walk back we tried out the shower; hot water, pressurized, lovely, and broke camp.

Navigating around the Toroweap area requires high clearance, and 4WD is recommended. Investing in recovery kit pales to the $1000 to $2000 tow it would take to extract a vehicle from here.

The Montero is remarkable off-road. Deflating to 20 pounds of tire pressure evened out the washboards and rocks and made for excellent traction and good control at speed. 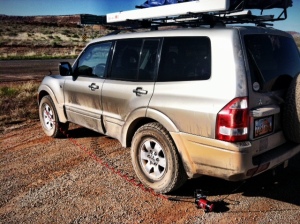 At the Highway 389 junction, we aired up and made our way home on pavement from Pipe Springs to St. George.