We spotted it out at least thirty miles as we headed down the A35 to our stop for the night in Colmar. A few days previous when we checked in to our hotel in Strasbourg we found a brochure for this edifice, the Château du Haut-Kœnigsbourg, but wrote it off at the time since we had yet to entertain the idea of renting a car.

The sight of it high above the valley floor teased us along and without a map or GPS somehow I knew it was Haut-Kœnigsbourg. Our nifty C3 finally came upon a roadside sign confirming it, and though it was late in the afternoon, we took the exit. This would prove adventurous, something we’ve always needed to do more of regardless of the destination, taking more exits that is, not knowing where they’d lead us or what lay beyond. This became practice for us for the rest of our journey.

A two-lane brought us to the town of Kintzheim where it enters a town square. Follow the signs to the chateau and in less than a minute you’re climbing the Vosges mountains into the forests of Kintzheim and Selestat. The road winds through a plantation of wild monkeys of all things and climbs and switches back until it delivers you to the castle steps. Or pretty close to them.

This was awesome, and not in some kind of inarticulate way void of meaning from overuse; this place struck awe within on so many levels. Not the least of them were the logistics in building such a structure. It’s earliest recorded history is twelfth century when it was discovered. The castle had been sacked three times since and restored, most recently at the turn of the nineteenth century. We don’t normally associate ideas of restoration in terms of centuries.

Both our cameras died shortly after entering the castle’s gates, so impressions will have to extend solely from this prose, the most potent of which is the notion of conservation more so than preservation. 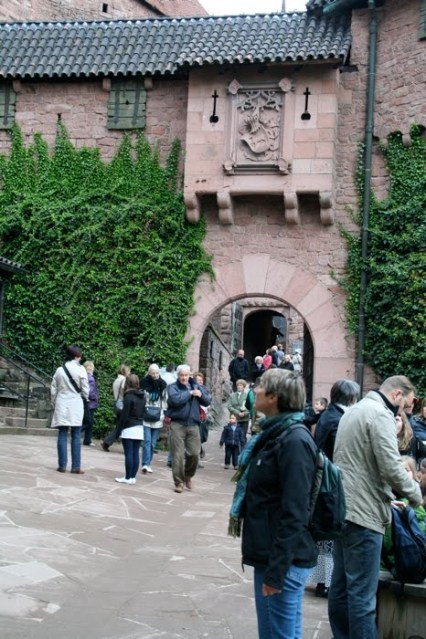 With all the contemporary hubbub of going green, Haut-Kœnigsbourg is an ensign to its possibility. Possibility is a misnomer, its return is more appropriate. This ancient structure is a testament to living off the grid and not in some survivalist sense; it’s inhabitants appeared to have thrived at least until they were overrun by attacking Swedes.

Traditional means of harvesting energy from the wind, water and sun were exploited, but the construction of the living areas within the castle itself was done in consideration of insulating from cold and heat, developing radiant heat induction methods that appeared to have provided a cozy context while staggered windows from inner to outer walls aligned to allow sunshine in the winter and deny or at least reduce her intrusion in the summer. 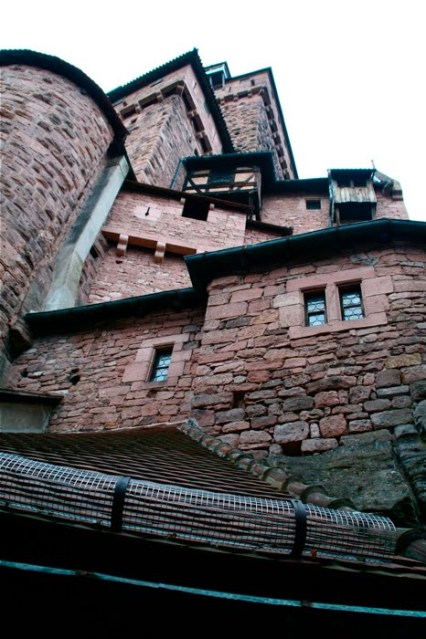 All this made me realize that for us to go green is not dependent on technology, new or old. It depends on us and what we’re willing to endure in temperature range and proximity.

Night fell pretty quickly on this long day’s journey. After leaving the castle we mounted the A35 again and made our way to Colmar for the night.