If I had a bucket list, touring the Isle of Man would be in the top three for two reasons; the Isle of Man TT – home/mecca of the world’s oldest motorcycle race, and the film Waking Ned Divine, one of my favorites, shot entirely on the Isle of Man.

So when resources and opportunity collaborated we set out on a trip to Europe to see all that we could in ten days resulting in what we now call the Short Attention-Span European Scaffolding Tour. It started in Dublin and took us all the way to Rome by train, plane, automobile, ferry and motorcycle, not in that order.

Dublin was a flight destination chosen to make the transition to Isle of Man which for those geographically challenged sits in the ocean between Ireland and England – the UK’s best kept secret. You can get there by ferry from Dublin (the plan) or from Belfast (plan B) if you know how to read encrypted ferry schedules for the off-season traverse of the sea.

Off-season was the least of our worries though, since Mother Nature appeared to have different ideas about our reaching our destination in Dublin, mainly in the form of a volcano. The day before departure didn’t look good with reports of airport closures in Ireland and the UK, but her Fickleness blew the ash another way clearing a route to the north of the volcano where Mindy was able to capture this frame of the plume of ash and smoke penetrating through and blowing east. If this luck were any indication of things to comes, we were in for a good trip.

While keeping a weary eye on ash I also decided it would be best if we went for plan C to get us to IoM, a twin prop puddle jumper from Dublin to Douglas. 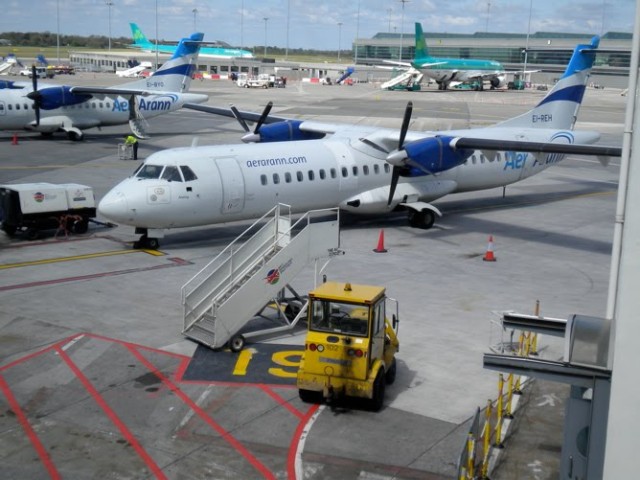 An uneventful skip and a very sympathetic and brilliant cab driver later, we were deposited at the curb of our hotel in Douglas, The Admiral. 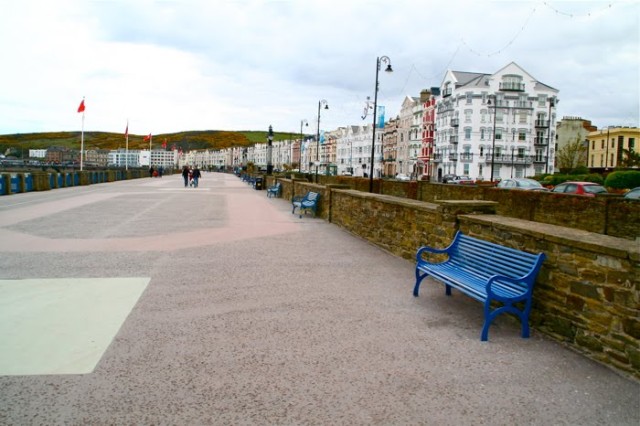 The hotel anchors a long row of hotels and restaurants that line Douglas’ promenade. 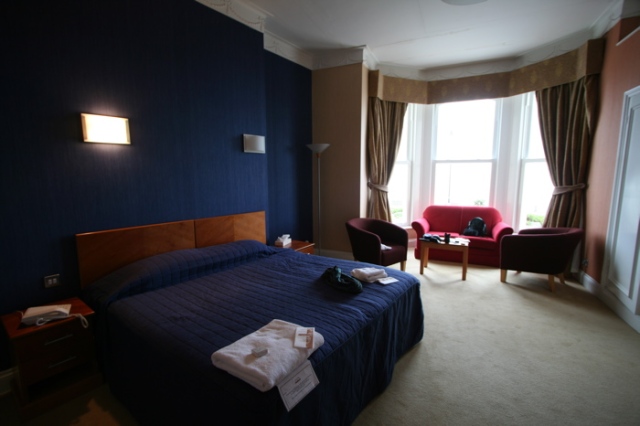 We were comfortable there, but perhaps would have been about anywhere after twenty hours of travel. Once settled we explored the city.

Where the hotel row ends is where the financial district begins. Isle of Man is home to off-shore investments and deposits, a revenue foundation for this sovereignty of two to three percent unemployment, ten percent income tax, no sales tax, socialized medicine and education in a system that appears to not only function, but flourish.

Wow, imagine, a functioning government for the people. What we saw of their schools, medical facilities and infrastructure indicated community pride and fidelity on levels only imagined outside of the movies.

Monday morning after coffee and breakfast sandwiches we called our driver from the day previous to take us to Castletown where Jason Griffiths’ motorcycle business is established. A week before departure I booked a hire of a Triumph Bonneville through Jason.

He owns and operates a Triumph/BMW dealership and is modest about his thirteen TT podium finishes, even blushed when I called him out on that. He took care of our paperwork and within a few minutes we were oriented to our Bonnie, wrapped up tight in our pedestrian outer wear with our demi-casques and we were off, left side of the road and all.

It’s a bit frenetic riding on the opposite side of the road. I had to constantly remind myself, “left, left.” Easy for any non-dyslectic. It wasn’t long before we got the hang of it and were ambling along to Cregneash, one of the locations of the film.

The road pitches and undulates along green sheep-sheared fields lined with blooming yellow bushes like a patchwork quilt. The road begs you along.

Just a couple of miles away from Griffiths’ shop we stopped at Cregneash for a walking tour. We garnered a couple of looks from locals still in our helmets and baclavas, but it was a wee bit too chilly to remove them.

Cregneash is the photo village for the story of Waking Ned Divine. Several pivotal sequences were shot in this ready-made location. Little if any art direction was needed to pull off the cultural and social contexts of this location. 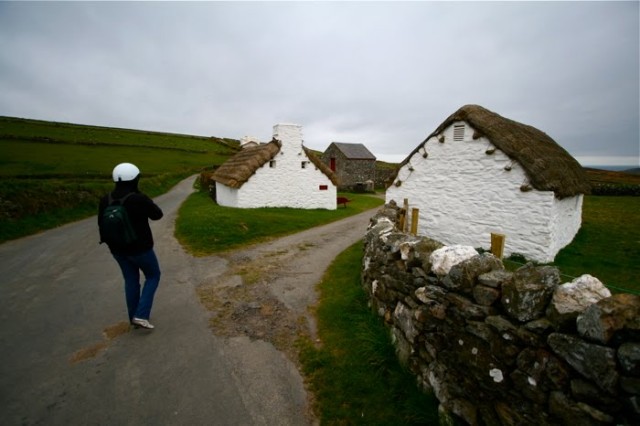 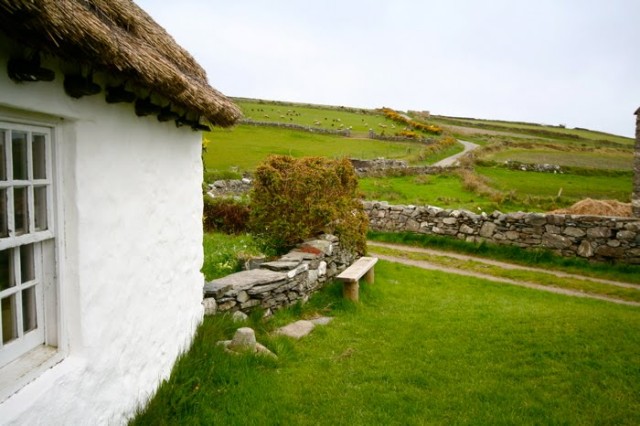 We hiked up the hillside among the sheep and got a shot of the village and then made our way to the chappel where Ned Divine’s wake and funeral were held. 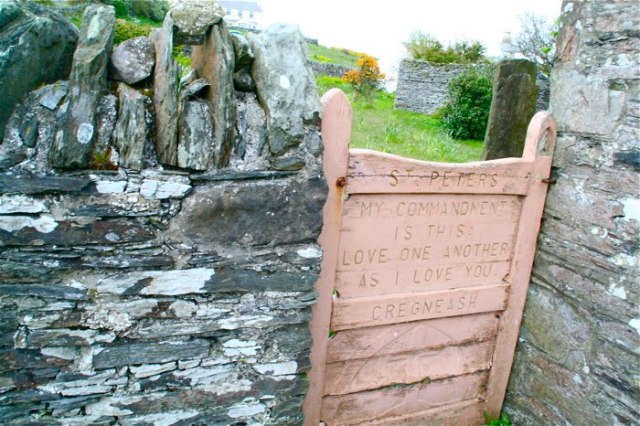 I’ve had my share of movie sets and art-directed magic, the patina of the biz that only looks good on camera. This place transcends what optics could create, it soaks in deep and quick to a point of indigeny.

If you weren’t from here you immediately wanted to be.

Mist from the Sound moved us along and we made our way back to the Bonneville and rode to it. The Sound separates the Isle from the Calf of Man. It’s the end of its little world. We rode the out-and-back lane to its terminus, took in the choppy junction of isles and sea, and posed with the Bonneville before lunch.

This is one of the few places where doubling back on a road doesn’t matter. There’s nothing redundant about chromatic stimulus, though I suppose one could get used to all the green after about a lifetime. Or maybe it’s just that we’re saturated with red.

The Bonnie took us to Port Erin next. Settled in a sandy crescent this town is stately, almost as much as Douglas, with grand hotels and fine restaurants and shopping, and no people. Our morning conversation with our cab driver-slash-chamber of commerce revealed that before the convenience of air travel the Isle of Man was the vacation destination of wealthy Irish, Brits and Scotts alike along with the bourgeois from the Continent. Today she’s overlooked for packages to Florida or Bermuda. And so stands the ghost towns, still impeccably tended, in storybook contexts waiting for simpler times to prevail again. 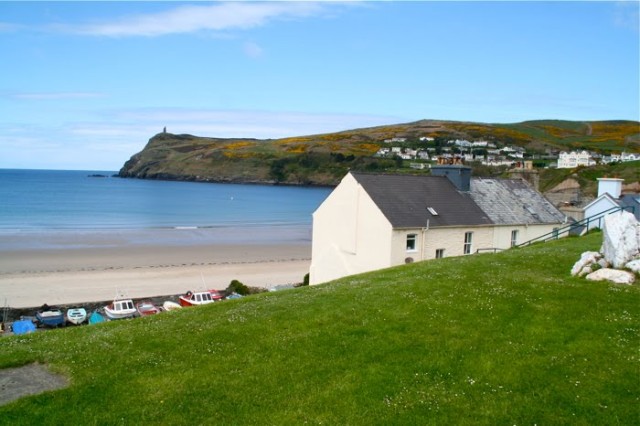 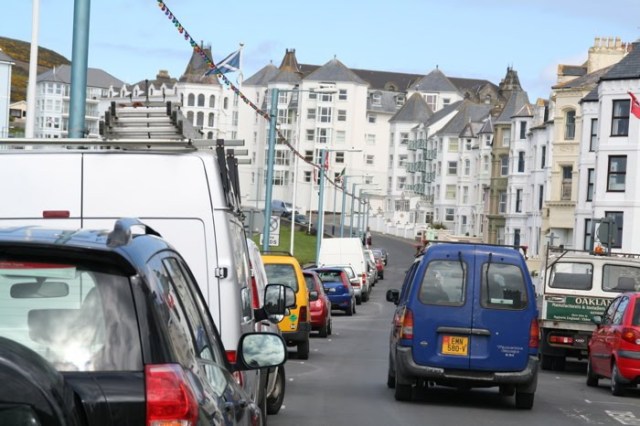 From Port Erin we ambled long the southern arteries of the island, popping through parishes with little towns like Dalby, Glen Maye and Patrick in search for where our path merged with the great course of the Isle of Man TT.

We used a map lent to us by our cabbie to navigate, finding the port of Peel to have a castle, so we had to have look, our last diversion before mounting the TT.

Peel is another harbor town tucked into a crescent and on its southern tip is the Isle of Patrick now connected by a causeway, sits a wall surrounding the remains of a village punctuated by towers, the Peel Castle. 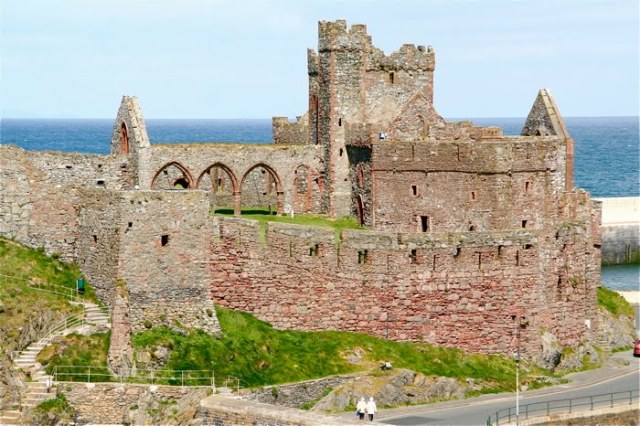 Just as we parked the Triumph an older gentleman parked alongside in is old Morgan. He hopped out and came over to us and said, “I’ll show you mine if you show me yours.” An invitation any motorhead cannot resist. He politely attended our review of the rented Bonneville and then opened the bonnet of his ride. All original. He then played one of his beer bets by pulling one-by-one three of the four spark plug wires from the top of the intake manifold and the old car ran like a sewing machine on just one cylinder. 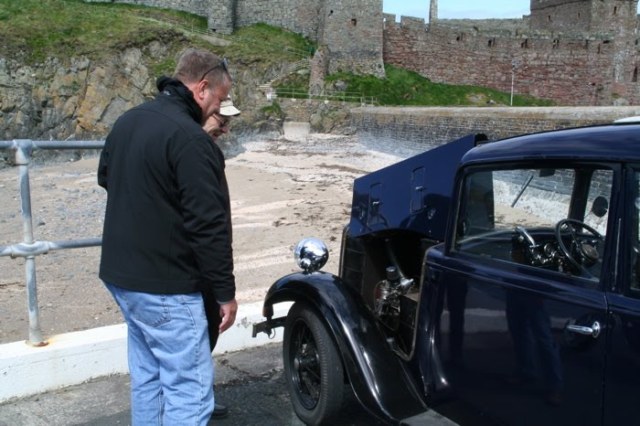 The Peel Castle is an eleventh century ruin built by Vikings originally as a Celtic monastery. It’s the home of the Black Dog ghost, the likeness of which scared Mindy right out of her baklava.

The next objective; the TT course. We followed a route out of peel to connect to the A3, the western part of the route. There were  number of indications that we had  mounted the TT including signs saying that we were, black and white curbing, installations of hay bales and large cushions attached to trees, houses, poles – anything that might stand the smack of an errant motorcycle racer, as if at speeds near 200 mph on these roads anything could abate the almost certain departure in a body bag. The other indications of the TT course were the fervent road workers kneading out unnecessary potholes and bumps in the surface. 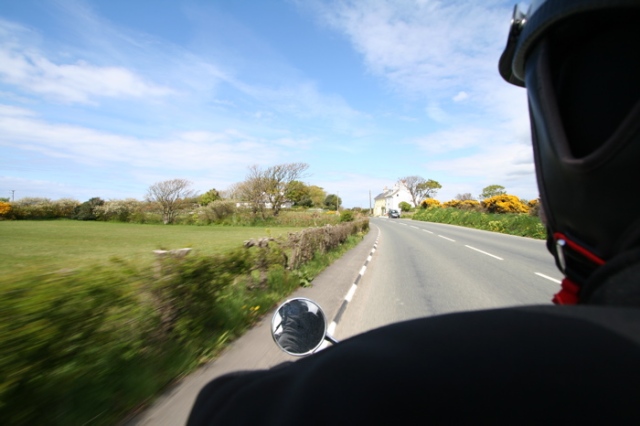 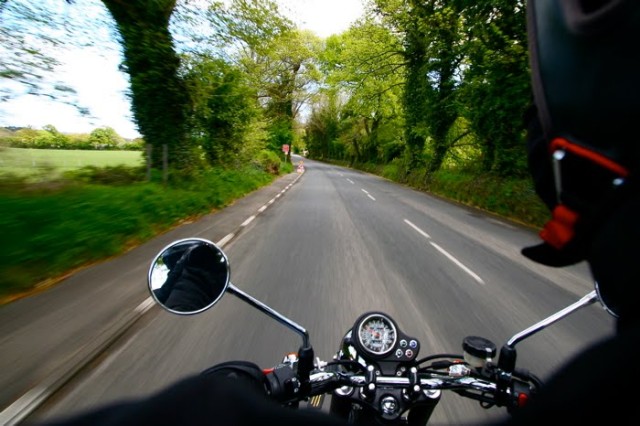 Exhilarating. Permagrin inducing. I could go on and on as we did on this spectacular course, but I won’t. You’ll just have to experience it yourself. We devoted the rest of our ride to just that, riding, and didn’t stop for photos until we got back to Griffith’s shop where we said goodbye to the Bonnie and basked in the thrill and glory of the world’s most spectacular motorcycle ride, save, of course, for the Pacific Coast Highway. 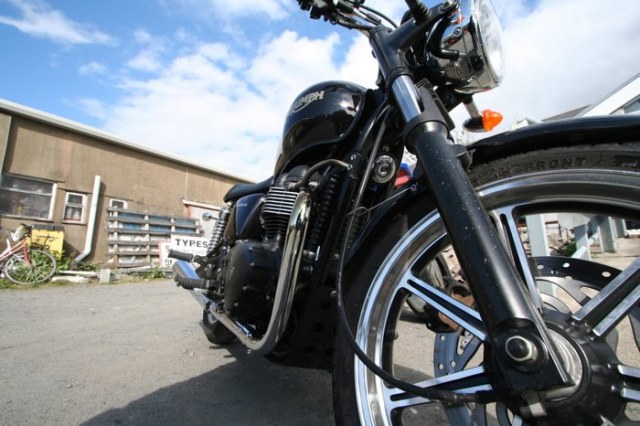