There is no such thing as all-weather gear. This is a muse to sell you something, more deluded, in fact, than one-size-fits-all. Nothing tests this fallacy better than a motorcycle trip in the high desert of the Southwest.

Any trip east for us begins through the portal of Zion National Park, setting a high mark for the rest of the journey. We got a later-than-usual start on Friday (June 26) putting us on the switch-backs of the Zion tunnel after high noon. Summer traffic lumbers up and down this spectacular road, usually with oversized RV’s and unfamiliar drivers of American rental cars. On this day, though, the arteries were clogged by a sweeter fare, a gathering of Model T Fords.

Hundreds of them from fully restored to rolling originals making their way up the red switches to the cooler of the tunnel bored into the side of the mountain. The sound they make alone is enough to make anyone fascinated with internal combustion smile, a traffic plaque we were pleased to endure.

Out of Zion on the east side we made Mount Carmel Junction in good time thanks to the great road manners of the T drivers. On 89 SB skies were ominous and we geared up for rain.

What we got was wet. Our gear doesn’t claim all-weather. We use dry suits from our other habit of kayaking to insulate us from the horizontal precipitation one experiences on a motorcycle.

Pragmatic neopreaned wrist, ankle bands and collars, highwaisted pants and draw string tops kept us dry while we rolled down 89 to Kanab. We stopped at the last gas station east of town to top off when the sky fell.

We kid about getting our annual rainfall in an afternoon. Monsoons in this area roll in quickly and dump a lot of water only to be evaporated a few moments later. But this one was slower moving, filling anything convex with water. We left our rides at the pumps and waited out the down poor inside the convenience store. It let up, we geared up and mounted, heading west to Page, AZ.

This little monsoon washed the way for us until we over took its trailing edge at Paria. Lightning was touching down all around us so we dared not stop, being the highest objects around. Pelted by ping-pong drops and draft spray off of overconfident semis, anything short of being hermetically sealed would have failed to keep us dry.

At Page we reached the dam, grateful for a break of sunshine wedging through and highlighting the shore at Wahweap. As we crossed the Glen Canyon dam we saw plumes of runoff plunging into the Colorado. That was a lot of water. 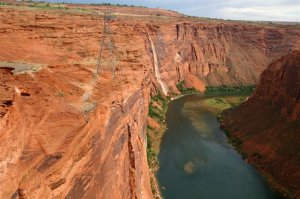 There’s a Denny’s just up the road (we love Denny’s) where we stopped. Our booth was a yard sale with wet dry suits, bags covers, socks, layers of wet leather and mesh and brain buckets. We weren’t soaked clear through, there were dry spots, just not where you’d like to have them.

Grilled cheese, chicken noodle soup and coffee; rainy day comfort foods felt as good as the dry cottons we’d changed into. A while later we moved back to the bikes parked against the backdrop of the dam and Lake Powell, under blue skies and Simpson clouds. No-trace weather. We wrung out and packed and geared for the high dessert ride on 98 to 160 to Kayenta.

Ninety Eight out of Page is a gentle rolling undulating two-laner that begs more throttle. The land goes on so far it hurts your eyes to see the end and the colors stain the chrome. Late afternoon temps around 75 degrees, cool enough at speed to feel like you could control your own comfort. This was a memorable glide, so much so for me I refused to stop and take a photograph. We reached Kayenta by evening, not that we really knew when that was since the Reservation does or does not observe DST in a state that does not when it is. We never really knew what time it was. Not that it mattered.

We met our friends there, other motorcyclists and pillions with which we ride; a particular group bent on leaving ingrained cultural machinations behind and enjoying everything the day can throw their way. You want to ride with people like this.

Saturday morning and a free breakfast buffet a la Hampton Inn are when and where we planned our ride for the day. Monument Valley, paved or unpaved, Bluff, Utah, Four Corners and back, about two hundred thirty miles.

We fueled up the rides; a Glide, a Vulcan, a Shadow, a Shadow Spirit, and of course the Sporty and the Blackbird. And we got a bit more familiar with two newcomers to our group the son and daughter-in-law of the Shadow ACE-riding couple. You want to ride with people like this.

Up 163 to Monument Valley. I leap-frogged the pack stopping and shooting stills as they went by (pan, Eric, pan). Blurs, all of them.

At the Park we found the main loop closed apparently due to flash flooding the day previous. The alternative was a washboard dirt road that wound around a few of the closer hoodoos and monuments.

The Blackbird wasn’t made for this, so I parked her and went two up on Mindy’s Sportster 1200L. Low. We made it even lower.

This is why man invented dual-sports (and a welcomed justification towards a purchase). But there we all were, all on standards, bouncing and jarring and wiggling our way through a landscape I though only existed in John Ford movies.

Everyone was undeterred, Byron especially, our resident dirt-biker. He rides the Vulcan, a recent acquisition. And the verb rides knows new meaning through this throw-back to barn burners and caged thunderball riders.

Call wardrobe and you’ll have a couple of cowboys. 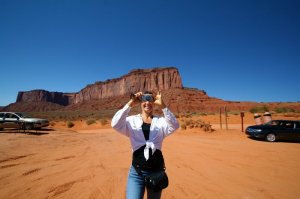 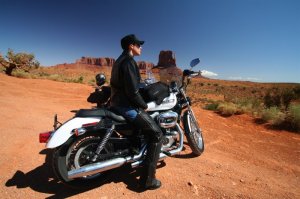 We’d pass cagers, most of which interrupted their landscape-leering to shake their heads at us.

It was the most fun I’ve ever had on a Harley, even wore an item of HD paraphernalia as captured in this rare photograph. My scalp was getting toasty. 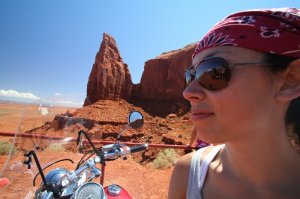 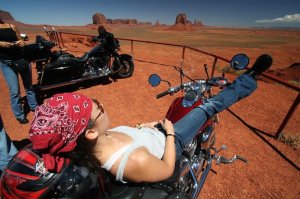 On our way out of the loop our daredevil clipped something hard enough to pinch the circuit of the kickstand-down kill switch. 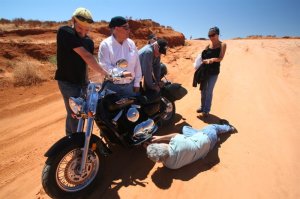 There’s a joke in here somehow, like, how many recovering Mormons does it take to fix a motorcycle in Monument Valley? Email me your punch lines and I’ll post them.

The Vulcan nor Byron were down for long. He made a literal band-aid repair and we made our way back to asphalt.

Past Mexican Hat into Utah to Bluff where we stopped for lunch at the Twin Rocks Cafe. Okay BBQ and sandwiches. A bit to be learned though about customer service. We paid our tabs and left the restaurant when the owner came out and shouted after us that we’d left a ticket for a soda unpaid. All our drinks were on our bills, paid for. But he was determined. Turned out to be an error on their part, $1.79 mistake enough to shout after your clientele about. Must have been that biker persona we all sport. 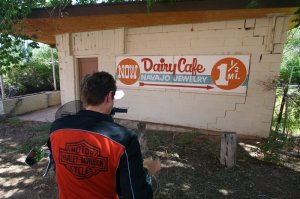 Four Corners is an odd tourist trap. Misleading to begin with since the actual four corners is yonder a couple of miles.

Three bucks a head to get in, a line in the sun to wait for your turn to put a limb in each state, though you’re not. But don’t tell anybody. We made all kinds of connections with this ideology, queuing up like the civil sorts we are to participate in a tourist ritual regardless of how misrepresented.

Redemption, though, was in snow cones at a $1.50, the best buck and a half we spent on the trip.

Sunday morning and another Hampton breakfast buffet, and we hit the road for home via Tuba City, Lee’s Ferry and a stop for lunch at Jacob Lake, where there is none, kind of like Four Corners.

The food is always good here, served by clean cut Mormon kids in seasonal employment. My meal went on the slide though when I went for my debit card to pay the bill to find it was no there. I imagined I had it out when our waitress cleared my plate away, and when I looked to put the card with the bill, it was gone. Poof. I thought back through the events of the day, had the card when I filled up in Kayenta, paid cash for water in Tuba City…

Despite their searches in the garbage and other places, the kind staff came up empty-handed and I resigned to canceling the card as soon as I could get a cell signal.

Riding out of Jacob Lake it hit me; back at Lee’s Ferry we filled up, but it wasn’t pay-at-the-pump. I left my card there, prepaying to fill and never went back to close it! I’m dumbed down by the convenience and absent-minded to begin with. We broke from our party, left Mindy’s ride at Jacob Lake and went forty six miles back to Lee’s to hopefully retrieve my card. About thirty of those miles got pretty warm. Warmth puts Mindy to sleep and I felt the front of her helmet tap me between my shoulder-blades while she dozed on the back of the ‘Bird at 90 mph. Fortunately throttling off presses her against my back.

We reached the gas station and I fessed up my crime of an apparent gas-n-go. They had a sense of humor about it, telling me they got their money all right, it was I who was inconvenienced. I was glad they didn’t destroy my card. Or didn’t charge any more than the $17.63 in fuel.

This retour afforded me to stop and get a shot I’ve been meaning to get since we went through there in May. It’s kind of funny, like a surfer shooting waves with the curl, this for me is one of thousands of incentives for me to ride.

Back at Jacob Lake Lodge we retrieved Mindy’s ride and ran into a gentleman from Tennessee who rides a Kawasaki Concours 14. This guy knew his bikes and we talked on about the machines as we all do. And then I noticed the rear rubber on his ride, a low-profile car tire.

He said he put it on to get more miles out of it than he would get from a motorcycle tire. But there’s a reason why there’s a difference, and unless you’re on a trike, a standard flat tread, stiff sidewall tire will fight every corner, every turn. “Not if you know how to ride,” he said.

From the Lodge north to Fredonia the road twists and turns enough to keep you on your haunches and away from gawking at the incredible view. We dropped into the valley and stopped at a Chevron on the lip of Fredonia to cool down and rehydrate for the ride into Hurricane.

Post century mark in Hurricane, 107 degrees. The heat turns on as if the road that descends into the valley were its thermostat. Mindy made good use of her HD wet-vest, and I got to a point of not being able to legally (nor sensibly) take off any more clothing. I did soak my balaclava and put it around my neck, keeping me relatively cool all the way to Cafe Rio in St. George, our new traditional trip-ending spot.

As we unpacked all our gear and washed our rides it donned on me that while there is no such thing as all-weather gear, there certainly is all-gear weather.