We got off to an evening start, about 7:30 pm when Mindy finished her shift. Not much from SGU to Vegas except for the most expensive stretch of Interstate 15, which is the Virgin River Gorge. 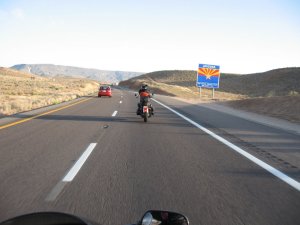 We made Baker by about 11:00 pm Pac Time. Travel advisory: don’t stay in Baker.

The Wills Fargo Motel. Not sure why it’s “Will’s.” The room had a price listing of every thing one would be charged if they took certain items out of the room. 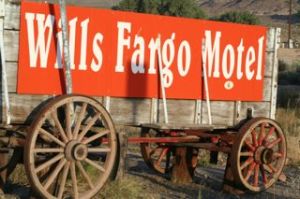 Baker is home of the world’s largest thermometer and coincidentally, home of the Big Bun.I’m sure there’s a connection there somewhere.

From Baker we hit Barstow for breakfast and then on to Bakersfield. We stopped roadside in Tehachepi to stretch legs and other parts of anatomy and check out the alternative energy. 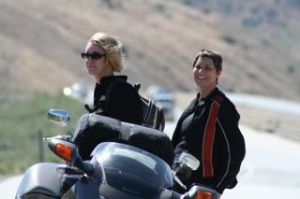 Take 58 past Buttonwillow on you’re on the Lost Highway, sixty plus miles of twisties and hoopdies, California’s best roller coaster.

We stopped in Santa Margarita for lunch and to post to Facebook at The Porch Cafe. And then on to San Simeon.

Think Joe Pesci. Throw in the Ozbornes, Andrew Dice Clay, 2LiveCrew, and you’re getting close to the camping companions we had at San Simeon last night. There’s an age-old technique of counting sheep when one can’t sleep. I counted F-bombs in stead.

All night long. Got the whole run-down on their sordid past, from three generations of murderous drug dealers, to wretching and vomiting this morning.

That notwithstanding, we had a good meal and a bottle of cheap wine, sat through a wonderful sunset and let the vibrations of the road whittle through our souls as we fell asleep on our $5.00 pool mattresses. 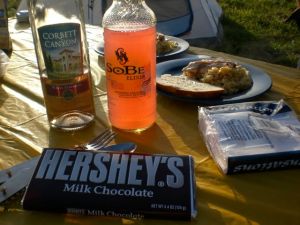 The girls are “Boutiqueing” this morning as I post this, walking along the rows of shops in Cambria. I’m at Cambria Cappuccino writing and having a good cup of coffee.

Left hell behind us to have a great ride up the PCH to Big Sur.

After I posted in Cambria we rode up 1 and stopped at our usual haunts: San Simeon Beach where we were married. Actually, we just made it to the pier ’cause who should we run into but the camping family from hell.

Checked out the Elephant Seals near Hearst. 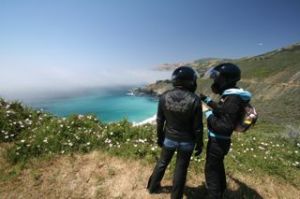 Made it to Big Sur to find the campground closed for renovation so we roughed it at the lodge; got a very nice bungalow with a pool no less, great beds (our own room away from that teenager) and an Adirondack chair to work the road kinks out of my ass. 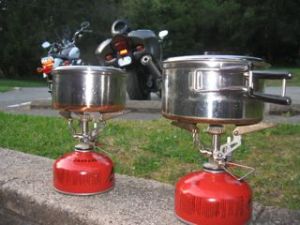 We made a meal out of bread, cheese and two cans of chicken noodle soup, and spent the evening downloading video and listening to Katie’s, um, music. 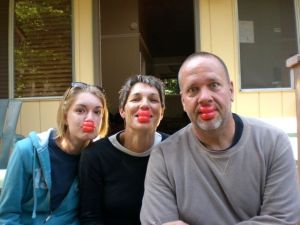 Video from the PCH

Our turn-around day, and with some chagrin. Actually, a day hasn’t passed without any of the three of us saying, “Let’s stay.” The train in the distance.

And if somehow we were able to manage that, sell our upside down house, liquidate our stuff, buy that VW Westfalia and wash feet for a living, how long until someone says, “I sure miss Zion?” 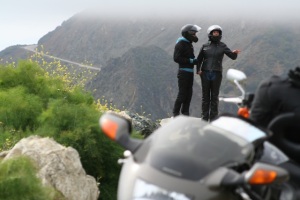 Paul Simon’s song, Train in the Distance, has a bridge that says, “The thought that life could be better is woven indelibly into our hearts and our brains.” No truer words.

But I have to believe I’d never get tired of this, this junction of land and water seamed by a ribbon of asphalt, ridden by a machine that leaves no yearning for something different. It’s a satisfaction to share this with ones I love so much, first hand, saturating all our senses, indelibly impressing our memories, along with these pics, a satisfaction that I’ve never come by previous, or in any other place than this, the Pacific Coast Highway.

So we’re going to turn our motorcycles east today, the ocean to our backs, and ride above the hills that separate the fantasy and be simultaneously sad and anticipating coming back in August with different craft to kayak these waters instead of skirt them. 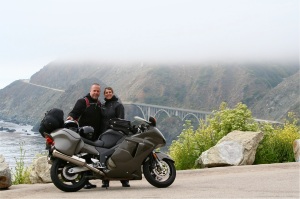 We left our digs at Big Sur and had a cool ride north to Monterey, picked up 68 into Pacific Grove which turns into Sunset that meanders through the most impressive real estate this country has to offer.

At Cannery Row we found breakfast and wandered the shops, rode to the wharf and found a Creperie with WiFi and posted the last entry.

We mounted again and turned our noses south, heading back down 1. At Lucia we heard that thunderstorms were approaching, so we abandoned our plans for camping and decided to stay at our favorite place on the planet, the Cavalier Oceanside Resort in San Simeon.

Along the way, though, is a favorite turnout, the photo op of photo ops for this trip that overlooks the PCH and one of her elegant arching bridges.

Relaxing was the order of the morning. Coffee, robes, fire, ocean. It’s not often when I can get to a state of letting the little things go, but it happened this morning.

This is a magical place for us, a feeling that surfaced the moment we pulled up to the Cavalier. We started our marriage here and have returned every time we’ve ridden the PCH.

So it’s no wonder we have a hard time leaving this behind. Mindy said she cried as we left Cambria. Tough to do in a full face helmet, but she’s a tough girl.

It was in the low 50’s in San Simeon and twenty minutes away in the vineyards of Paso Robles we couldn’t shed the layers fast enough as ambient temps hit the century mark. It was toasty all the way across the valley.

Another of our favorite stops is the Donati Family vineyard.

We stopped there March 2008 when we were shooting the PCH documentary and while the crew was setting up the shot a Google Street View camera car pulled and caught us. (It’s since been updated and we’re no longer famous.)

We rode 46 on through Paso Robles and came upon the intersection of 41, hallowed ground or haunted, it’s the place where James Dean lost his life behind the wheel of his Porsche. 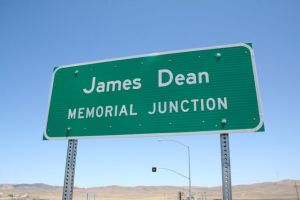 We cooled off at the last known stop that Dean made before he made his exit.

Did you know that there’s a keyhole of a bull on the tabs of Red Bull cans? I didn’t.

Arrived in Bakersfield late afternoon and visited their HD dealership. There’s always a good story to be had at any HD shop and we were entertained with more Harley lore.

Say what you want, but this culture is woven into this country and has a legacy that can’t be denied.

But I didn’t say that.

We ended up at a Motel 6, ate at a local hole-in-the-wall Mexican place, Taco La Villa, where they had $1 tacos and $1 long necks. Best meal of the trip and I leave the cameras back in the room.

And now I’m caught in cathode-ray-tube hell while Steve Wazniac does the worm on Dances with the Stars, Katie’s favorite show.

I have to make some concessions. She’s been great to travel with. 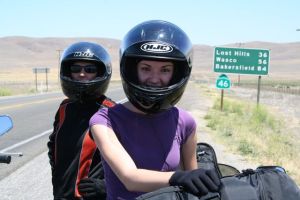 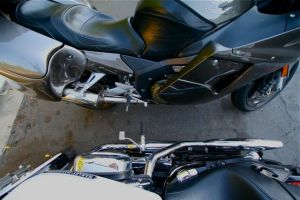 It’s a journey of stark contrasts; 50’s on the coast, 100’s in the foothills, twisties on 1 and 58, mind-numbing straights everywhere else, a Honda and a Harley, and the Cavalier at San Simeon and Motel 6 in Bakersfield. But, what’s a road trip without it.

We drew comments at about every stop today. At McDonald’s in Bakersfield another patron asked about our trip (we’re pretty obvious in all the gear) and then talked about his yearly tour of the western states. In Barstow a little ol’ lady in an old red VW went on about her daughter (who was standing there filling the Bug) rides a Harley and how her son-in-law was wiped out by a semi in Laughlin last year – stories we never like to hear. In Vegas, “Didn’t I see you ladies northbound I-15?” He quit talking when I showed up.

There was no one around at the Mojave Air and Space Port where we stopped for a photo, save one guy who was hauling huge pumps on a forklift who advised us to park in a safer spot since one of those rolled off the forks the other day. Agreed.

The conversation at every stop had to do with relocating to California. So we talked about advantages to staying in St. George. We took our family and friends out of the picture because that’s a gimme, and really, it all boiled down to the spot where we decided to officially end the trip: 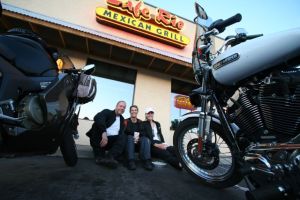